The veteran’s cover of You’ll Never Walk Alone, recorded alongside Michael Ball and the NHS Voices of Care choir, knocked the Weeknd off the top spot. 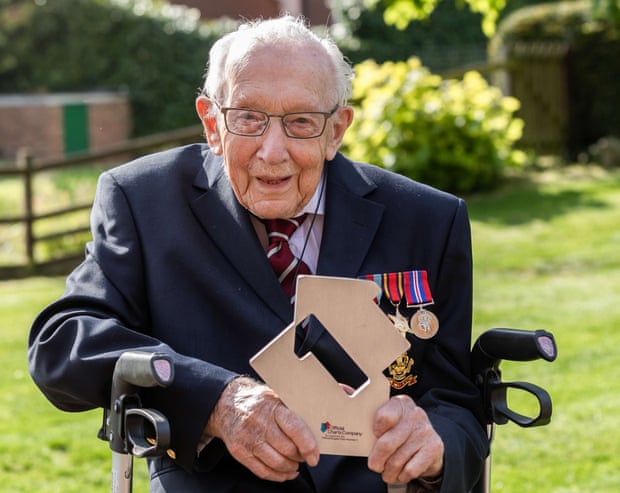 Captain Tom Moore with his No 1 trophy. Photograph: Emma Sohl.

Captain Tom Moore, who turns 100 on 30 April, has become the oldest artist ever to claim the UK No 1 spot with his cover of You’ll Never Walk Alone, a collaboration with Michael Ball and the NHS Voices of Care choir.

The charity single, released to raise money for the NHS, racked up combined chart sales of 82,000 units – the fastest-selling single of 2020 – pipping the Weeknd’s Blinding Lights to No 2 with 69,000.

Moore, who has already raised more than £28m in recent weeks for NHS staff, welcomed the “wonderful news”, saying: “My grandchildren can’t believe I am a chart-topper!” He thanked Ball, the choir, those behind the scenes who facilitated the release, and the general public. “We’re in this together, and I am for ever grateful for your support. And this just proves: you’ll never walk alone.’”

It is Ball’s first No 1 single. He said: “This is the most extraordinary thing, one of the proudest moments of my career, but it’s not about me, it’s about Captain Tom. Thank you for giving him a No 1 on his 100th birthday. You are the best, God bless ya.”

Martin Talbot, chief executive of the Official Charts Company, said there was “almost nothing” between Moore and the Weeknd’s respective tracks on Thursday – until the latter’s Abel Tesfaye tweeted encouraging fans to support Moore. “We’re rooting for you,” he said. Moore thanked the Canadian R&B star for his “kind gesture”.

Sales from the track will add to the millions of pounds Moore has already raised for the NHS after walking 100 lengths of his garden prior to his centenary on 30 April in the hope of raising £1,000. Prince William paid tribute to Moore, calling him a “one-man fundraising machine”.

You’ll Never Walk Alone will occupy its chart position at least for the next seven days, meaning that Moore will become the first centenarian to have a UK No 1. The second-oldest UK No 1 holder is Tom Jones, who was 68 years and nine months old when (Barry) Islands in the Stream reached the top in 2009. The success of You’ll Never Walk Alone makes Ball, at 57 years and nine months, the seventh-oldest musician to claim a No 1.

Moore was born 32 years before the UK singles chart was first compiled by the New Musical Express on 14 November 1952. Al Martino’s Here in My Heart was the first chart-topper.

You’ll Never Walk Alone is not the only charity single in the Top 5. The BBC Radio 1 Live Lounge Allstars’s cover of the Foo Fighters’s 2002 song Times Like These – featuring such stars as Dua Lipa, Coldplay’s Chris Martin, AJ Tracey and original writer Dave Grohl – debuts at No 5 less than 24 hours after its premiere on the BBC’s The Big Night In.