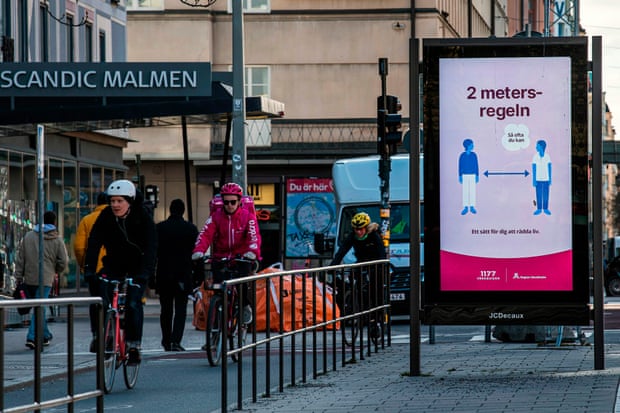 An advert in Stockholm instructs people to stay 2m apart to reduce the risk of spreading the coronavirus Photograph: Jonathan Nackstrand/AFP via Getty Images


Sweden has reported 170 more deaths from Covid-19 in the past 24 hours, bringing the total death toll from the coronavirus in the country to 1,203.

On Wednesday, the Nordic country passed the grim milestone of 1,000 coronavirus deaths, far exceeding the tolls of its nearest neighbours, as scientists continue to question the government’s light-touch approach to the pandemic.


The Public Health Agency on Tuesday announced a total death toll of 1,033 from Covid-19, a rate of 101 per million inhabitants compared to 51 in neighbouring Denmark and just 11 in Finland, both of which imposed strict early lockdowns to curb the virus’s spread.

Sweden’s per-million tally is also significantly higher than the 37 recorded in Germany and the comparable US figure of 79 – but remains lower than the UK’s rate of 182 and far below Italy’s 348 and Spain’s 386.

A group of 22 doctors, virologists and researchers on Tuesday criticised the health agency in an op-ed published by Dagens Nyheter newspaper.

“In Sweden, more than 10 times as many people are dying than in our neighbouring country Finland,” the group wrote. “The approach must be changed radically and quickly. As the virus spreads, it is necessary to increase social distance.”