Oscars 2018 - A jet ski for the shortest speech and fewest female winners in years ...


A battle cry for inclusion: The Shape of Water triumphs in Oscars of seismic change.


But this year actually saw the fewest female winners in years.


The Shape of Water, a romantic fable about a janitor who falls in love with a sea creature, has swept top honours at the Oscars in a ceremony that turned into a battle cry for inclusion and female empowerment.


Guillermo del Toro’s cold war-era fantasy about the triumph of outcasts fended off the satirical horror Get Out and the drama Three Billboards Outside Ebbing, Missouri, to take best picture and director, continuing a winning streak for Mexican film-makers in Hollywood.

The 90th Academy Awards turned Sunday night’s ceremony in Los Angeles into a celebration and exhortation of representation and inclusion, after a year marked by seismic cultural change in Hollywood that rippled across the world.

1:05 'Stand with me': Frances McDormand gets every female Oscar nominee on their feet – video

Frances McDormand, who won the best actress award for playing a grieving, furious mother in Three Billboards, created one of the night’s most memorable tableaux by asking all the female nominees in the Dolby theatre to stand up. “Look around,” she said. “We all have stories to tell and projects we need financing.”

She finished her speech saying: “I have two words to say: inclusion rider”, a reference to a little known contract clause that lets actors demand diversity on both sides of the camera. Backstage, she stressed this is a new era. “We’re not going back. It changes now ... power in rules.” 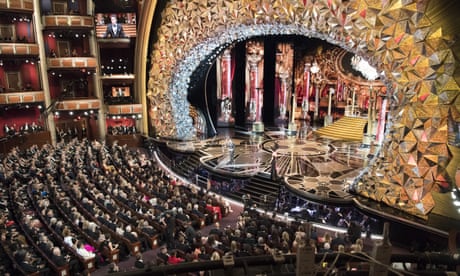 James Ivory, 89, became the oldest winner of an Oscar for the gay coming of age drama Call Me by Your Name, in the best adapted screenplay category.

A crystal stage, clips of classic films and appearances by veteran stars projected a nostalgic glow, but the ceremony crackled with contemporary politics and social activism related to sexual misconduct and immigration rights. 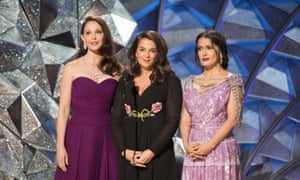 Salma Hayek, Ashley Judd and Annabella Sciorra, who went public with allegations of sexual misconduct against the disgraced producer Harvey Weinstein, jointly presented an emotional montage that channelled the anger and hope of the #MeToo and Time’s Up movements. The movement’s leaders had decided to stand down for the night, in contrast to the Golden Globes, whose attendees expressed solidarity by wearing black, but Hollywood’s mood of reckoning still permeated proceedings.

Along with jewellery, the traditional gift bags for top nominees included pepper spray and a “phobia-relief” therapy session. On the red carpet, most stars shunned the E! News presenter Ryan Seacrest because of sexual harassment accusations, which he denies.

The host, Jimmy Kimmel, joked in the opening monologue that the Oscar statue set an example for Hollywood: “He keeps his hands where you can see them, never says a rude word, and literally doesn’t have a penis.” This was the year that men screwed up so badly “women started dating fish”, he said, referencing The Shape of Water.

Kimmel also addressed last year’s fiasco, when the wrong best picture was announced. “This year, when you hear your name called, don’t get up right away,” he told the audience. “Give us a minute.” 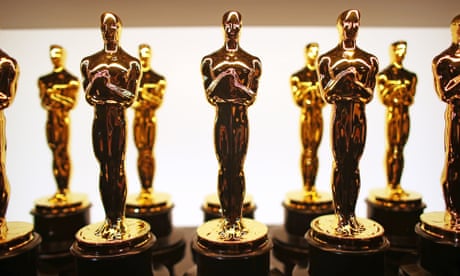 Warren Beatty and Faye Dunaway, who initially, incorrectly announced La La Land instead of Moonlight the winner last year, surprisingly returned to present the best picture award – this time without a hitch.

Del Toro’s victory was the fourth time a Mexican director has taken Oscar honours in the last five years, following Alfonso Cuarón in 2014 and Alejandro González Iñárritu in 2015 and 2016.

“I am an immigrant,” said Del Toro in a veiled rebuke to President Donald Trump’s immigration crackdown. “The greatest thing art does and our industry does is erase the lands in the sand. We should continue doing that when the world tells us to make them deeper.”

Backstage, the director said artists have to honour their roots and said he would be bringing his statues to his parents in Mexico. “I’m going home with these two babies.”

Coco, about a Mexican boy’s journey to the underworld, won best animated film and best original song, prompting cries of “Viva Mexico” from the stage. Latino talent triumphed again when the Chilean drama A Fantastic Woman, starring trans actorDaniela Vega in the lead, won best foreign film. The drama was the first Oscar winner to feature both a transgender storyline and star an openly trans performer.
Advertisement

Weinstein, an Oscar svengali who in previous years was thanked more times than God, was nowhere in sight, banished from the Academy last October after multiple allegations of his predations triggered the #MeToo avalanche.

But a jarring moment came when the retired basketball star Kobe Bryant won an Oscar for an animated short based on his farewell letter to the sport, prompting accusations of double standards among Oscar voters, given a rape accusation made against Bryant in 2003 – a case that was dropped when his accuser refused to testify and settled out of court.

Kimmel promised a jet ski to the winner who made the shortest speech, weaving in a quiz show vibe to balance the politics. The show ended with Mark Bridges, the Phantom Thread costume designer, scooting across the stage atop the machine. His speech had clocked in at just over 30 seconds.
Upplagd av Kultur Vinden kl. 06:10