Melancholy and Mother Courage: why Three Billboards won the 2018 Baftas


Martin McDonagh’s black comedy, which features a powerhouse performance from Frances McDormand, surged to a surprise victory at the UK’s premier film awards 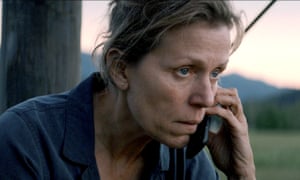 What a resounding and rather surprising victory at this Baftas for Three Billboards Outside Ebbing, Missouri which was crowned with best film. It also got best British film – a little counter-intuitively for a film from an Irish-heritage writer-director, Martin McDonagh, and a story drenched in Americanness. This is on account of its production and talent provenance: the same convention which a few years ago made Gravity a British film in the eyes of Bafta.

Three Billboards is a movie that has snagged, sharply, in the minds of Bafta voters, and they have responded generously to its mix of satire, jagged black comedy and wan romantic melancholy – and they also absolutely loved Frances McDormand’s powerhouse performance in the role of Mildred, which won her best actress. She had a kind of postmodern Mother Courage role, the grieving middle-aged women who is past caring what people think of her and who rents three billboards just outside of town to complain that the man who raped and murdered her daughter has still not been caught. The film has been paid the ultimate compliment of becoming a meme. We have seen a “three billboards” display deployed after the Florida school shooting,to attack Senator Marco Rubio over administration and gun control – and also to attack the British government over Grenfell.

Three Billboards also won best original screenplay (defeating my personal favourite, Get Out) and controversially – or predictably – it also won an award for Sam Rockwell in the category of best supporting actor. This was for his potent and much-admired performance as Dixon, an incompetent, racist cop who goes on a journey of redemption. Many felt that the movie was soft on racism, or that by making this character’s redemption nothing overtly to do with racism, it had made bigotry a kind of value-free character trait that could be jettisoned without discussion. The fact that Rockwell has won arguably shows the limits of online and social media campaigning as far as the Bafta electorate is concerned. But perhaps it also shows that Bafta had made a decision with which I am broadly in sympathy: that McDonagh’s good faith in creating this character should be regarded as intact; that Dixon’s bigotry was clearly shown as loathsome, and was part of the downfall that preceded his return. 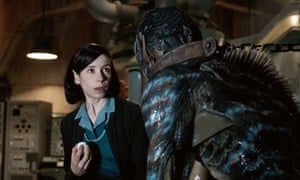 The Shape of Water didn’t do as well as many thought it might, but the best director winner Guillermo Del Toro showed us something visionary and in some ways almost shamanistic with his swoon-inducing fantasy romance. I have seen for myself the narcotic effect that this film has had on audiences – and the almost delirious response that he personally has elicited when he appears on stage afterwards to talk about his film. It is a resounding achievement in direction. Everything about it is shaped and controlled by a single agency: this is someone who knows exactly what he wants and what he is doing and the film shows every sign of conforming to what Del Toro saw when he first shut his eyes and thought about what The Shape of Water would be. It also won a well-deserved Bafta for production design.

Gary Oldman was always going to win best actor for his exhilarating and entertaining – if basically undemanding – impersonation of Winston Churchill in Darkest Hour (and it was wishful thinking that had me insisting, right until the last moment, that Daniel Day-Lewis was going to win for his performance in Phantom Thread). The part of Churchill was not so much a peach or a plum as a fat Cohiba cigar, and the heavily latexed Oldman gleefully puffed out great clouds of smoky charisma and hazy true-Brit greatness. He even managed to sell to us a scene that has become notorious to the film’s detractors: the imagined moment when he finds himself on an Underground train and chats with ordinary members of the public who reaffirm the great man in his profound belief in the rightness of what he is doing. I admit it is a broad and sentimental sequence, but Oldman carries it off the same way he carries everything else off: with tremendous elan, and a kind of galloping enjoyment in the role. And it is no surprise that Darkest Hour won for best makeup and hair: Oldman’s physical transformation was eerie. 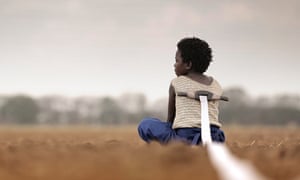 Real artistry ... I Am Not a Witch. Photograph: Kinology films/Soda Pictures

The victory for the first-time film-maker Rungano Nyoni for her excellent film I Am Not a Witch in the outstanding British debut category is good news – and this is the category that tends to mean the most to its nominees, and that has, proportionately, the most impact on the winner’s career. I admit that I was tipping Lady Macbeth here, but I Am Not a Witch is a terrific film with an elegantly tuned sense of humour and real artistry in its visual sense.

Allison Janney is such a superb actor it’s almost a surprise that she doesn’t dominate awards ceremonies every year like Meryl Streep. Her best supporting actress Bafta for I, Tonya is a satisfying result. She played the terrifying “showbiz mom” LaVona Harding, who drove the notorious 90s figure skater Tonya Harding to worldwide prominence – before Tonya was disgraced when her ex-husband arranged for her rival, Nancy Kerrigan, to be whacked in the knee. Allison Janney makes LaVona a hilarious, unrepentant monster who emotionally abused her daughter because she believed it would make her a better skater. Janney’s comic panache gave this film a grit and substance that it might not otherwise have had: her outrageous performance was the thumping bass guitar line that made I, Tonya such an addictively catchy film.

The most visually extraordinary film of the year has to be Blade Runner 2049: sensual, immersive, intoxicating and weird, and in some ways it is baffling that it isn’t coming up in awards-season conversation more often. But it’s deeply satisfying that Roger Deakins has won the Bafta for best cinematography for some of his most dazzling work. The film also won for best visual effects. Deakins has created his masterpiece – or at least his masterpiece so far – with Blade Runner 2049, whose rich, fierce, scorched colours created an interplanetary expanse of disquiet. It would be great if this incredible film could be revived in Imax cinemas, so that those who have not yet seen it can experience Deakins’s achievement at full stretch. 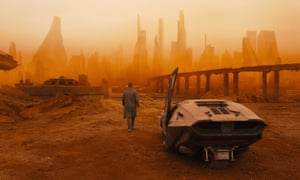 Baby Driver’s victory in the editing category was widely predicted, and seems like a just verdict – although by no means the most it could have achieved. The choreography of this movie was a marvel: it is the story of a hearing-impaired getaway driver who has to be listening to his favourite playlist to give him the right rhythm, the right mojo, to pull off his dazzling driving moves. The action was thrillingly in sync with the music, and the editing was an integral part of this.

It is disappointing not to see more Bafta love for that wonderful film Call Me By Your Name – which won best adapted screenplay – or for the brilliant satire Get Out. But the rising star award, which is voted for by the public, has gone to that outstanding London actor Daniel Kaluuya, who played the bewildered young photographer Chris in Get Out, and his staggeringly convincing American accent was the least of his skills. He is already sufficiently accomplished to win something more than rising star – he rose already! – and he may in fact do just that in Los Angeles next month at the Oscars. But never mind: Kaluuya’s wonderful performance in this chilling satire has demonstrated a power and maturity that give us a hint of even better still to come.