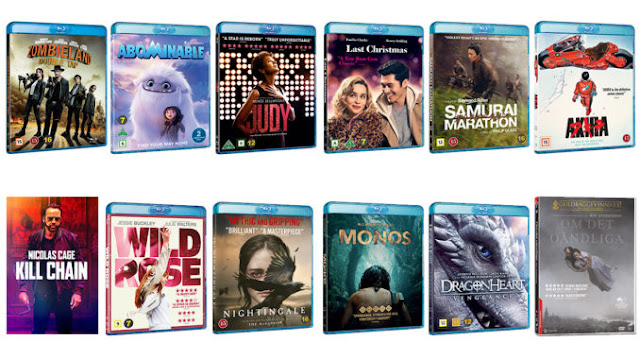 ABOMINABLE
Three teenagers must help a Yeti return to his family while avoiding a wealthy man and a zoologist who want it for their own needs.
On Blu-ray & DVD March 9

ZOMBIELAND: DOUBLE TAP
Columbus, Tallahassee, Wichita, and Little Rock move to the American heartland as they face off against evolved zombies, fellow survivors, and the growing pains of the snarky makeshift family.
On Blu-ray & DVD March 9

JUDY
Renée Zellweger won an Academy Award for her portrait of the legendary performer Judy Garland.
On Blu-ray & DVD March 9

SAMURAI MARATHON
The American imperialists are at the door and intruding on Japan. To assess and train his troops the lord of the land announces a marathon through the land.
On Blu-ray & DVD March 9

AKIRA
A secret military project endangers Neo-Tokyo when it turns a biker gang member into a rampaging psychic psychopath who can only be stopped by two teenagers and a group of psychics.
On Blu-ray & DVD March 9 (Sweden, Norway & Denmark only)

KILL CHAIN
Three strangers’ lives are inevitably entangled in a conflict none of them are prepared for.
On Blu-ray & DVD March 16

LAST CHRISTMAS
Kate is a young woman subscribed to bad decisions. Working as an elf in a year round Christmas store is not good for the wannabe singer. However, she meets Tom there. Her life takes a new turn. For Kate, it seems too good to be true.
On Blu-ray & DVD March 23

MONOS
On a remote mountaintop, eight kids with guns watch over a hostage and a conscripted milk cow.
On Blu-ray & DVD March 23 (Sweden only)

THE NIGHTINGALE
Set in 1825, Clare, a young Irish convict woman, chases a British officer through the rugged Tasmanian wilderness, bent on revenge for a terrible act of violence he committed against her family. On the way she enlists the services of an Aboriginal tracker named Billy, who is also marked by trauma from his own violence-filled past.
On Blu-ray & DVD March 30 (Sweden & Finland only)

DRAGONHEART: VENGEANCE
Lukas, a young farmer whose family is killed by savage raiders in the countryside, sets out on an epic quest for revenge, forming an unlikely trio with a majestic dragon and a swashbuckling, sword-fighting mercenary, Darius.
On Blu-ray & DVD March 30 (Sweden, Norway & Finland only)

OM DET OÄNDLIGA
With ABOUT ENDLESSNESS, Roy Andersson adds to his cinematic oeuvre with a reflection on human life in all its beauty and cruelty, its splendour and banality.
On DVD March 30 (Sweden only)