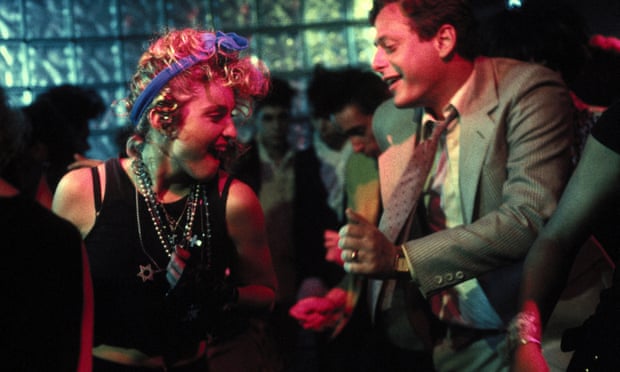 Mark Blum as the hot-tub salesman Gary Glass with Madonna as Susan in Desperately Seeking Susan, 1985.


The actor Mark Blum, who has died aged 69 from complications of the coronavirus, gave a memorable performance in the screwball comedy Desperately Seeking Susan (1985) as a harried, unfaithful hot-tub salesman plunged into New York’s grungy bohemian underbelly when his wife goes missing. Searching for her, he teams up with the devil-may-care Susan, played by Madonna in her first major film role, and is exposed to her wayward, outrageous lifestyle.

Blum’s screen test with the singer followed a similar pattern. After first mistaking her for a bike messenger in the waiting room, he was invited by the director Susan Seidelman to rehearse a scene in which their characters are dancing and talking in a nightclub.

“We came in and did our screen test and Madonna misbehaved,” he told the audience at a 25th anniversary screening of the film at Lincoln Center, New York, in 2010. “During the whole scene, she kept kissing and licking the side of my face which seemed inappropriate but, you know, fun. Afterwards Susan thanked Madonna, and she left. And Susan said: ‘Madonna likes you.’” The singer described him last week as “funny, warm, loving and professional”.

All those years later, Blum retained a fondness for the film, which also helped launch the screen careers of Rosanna Arquette, Laurie Metcalf, Aidan Quinn and John Turturro. “The movie is about possibilities – that’s what it seems to be about when I see it now – and we were all of us right on the cusp of something in our lives, professionally, at that point.”
Mark Blum in 2005.

Blum, who already had a thriving stage career, was soon fielding many movie and television offers, and ended up in another hit when he was cast as a newspaper editor in the culture-clash comedy Crocodile Dundee (1986), which made a worldwide celebrity of its Australian star and co-writer, Paul Hogan.

Commercial hopes for the picture were not high; during production, Blum recalled, it didn’t even have a US distributor. “I don’t think anybody except Paul really expected it was going to be a blockbuster hit. He was right and we were all sceptics. That’s why he’s rich and we’re not.”

Blum was born in Newark, New Jersey, to Morton Blum, who worked in insurance, and Lorraine (nee Fink), and was raised in Maplewood in the same state. He was also educated there at Columbia high school, where he was an enthusiastic participant in drama productions. He toyed with becoming a lawyer and engineer, and was slow to recognise his passion for theatre as any indicator of talent or ambition.

“I never for a minute at that age considered it for a career,” he said in 1980. “I was raised in one of those basic, middle-class Jewish families in the suburbs and that just wasn’t something somebody thought about.”

He performed at the Utah Shakespeare festival and then toured around 150 locations with the National Shakespeare Company before going to New York City, where he starred in The Cherry Orchard in 1976 and in The Merchant a year later; the star of the latter was Zero Mostel, who died of heart failure after the first out-of-town preview.

Blum became a regular figure on the New York Broadway and Off-Broadway scene, winning an Obie in 1989 for his performance as a playwright who travels back in time to meet Gustav Mahler in Gus & Al. He also starred in a 1991 production ofNeil Simon’s Lost in Yonkers and as Juror No 1 in the 2004 revival of Twelve Angry Men.

Movies included Blake Edwards’s slapstick comedy Blind Date (1987), with Bruce Willis and Kim Basinger; the Sean Connery thriller The Presidio (1988); Shattered Glass (2003), based on the scandal of the reporter Stephen Glass, who fabricated stories at the New Republic; and, with Sarah Jessica Parker and Pierce Brosnan, the comedy I Don’t Know How She Does It (2011), adapted from the novel by the British journalist Allison Pearson.

He appeared in numerous popular TV series including Roseanne, Frasier, NYPD Blue, The Sopranos and Succession, as well as The Good Wife and its 2019 spin-off The Good Fight. He was a regular in all four series of Mozart in the Jungle (2014-18), a comedy-drama about an eccentric Manhattan orchestra (Blum was the by-the-book piccolo player known as Union Bob), and in the Netflix thriller You (2018).

He is survived by his wife, the actor Janet Zarish.