FILM: Unpacking the ending of Last Christmas with Emilia Clark and Return to Me with Minnie Driver - another heart, another movie

Warning: This post contains spoilers for Last Christmas. But to be honest, the ending of the movie makes no sense...so even if you read exactly what is going to happen, it might not make a difference!] 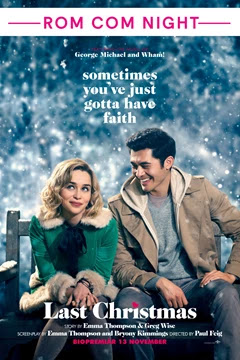 The end of Last Christmas is⁠—and I cannot emphasize this enough⁠—a complete mess. The only way I can accurately describe how baffling it is, is to confess that I actually knew the ending of the movie before I saw it. (Someone accidentally spoiled it, okay? I'm not a monster!) Even though I was fully equipped with the mother of all plot spoilers, I spent the entire hour and 43 minutes trying to figure out what the hell was going on. I'm still not totally sure, but feel it is my moral duty to at least attempt to unpack it for you.

Last Christmas is a holiday movie with a dark twist. The end reveals that Tom (Henry Golding) was actually a ghost (or a memory?) all along. After he died in a bicycle accident, his heart was donated to Kate (Emilia Clarke), who underwent a transplant for an unidentified illness that's vaguely referenced throughout the entire film. In theory, this twist should make sense. It's also a clever reveal for the title, Last Christmas, which is based on the George Michael song of the same name. Like, last Christmas...Tom LITERALLY gave Kate his heart! Wild!

Unfortunately, this twist was not executed well. It's reminiscent of the series finale of Gossip Girl, which declares Dan was actually your one and only source to the scandalous lives of Manhattan's elite. Like, great. Thanks for this information. Now nothing else makes sense, and there are approximately five billion plot holes. Nobody asked for this!

Perhaps the murkiest part of the surprise ending is that it's unclear whether Tom and Kate ever met, or if she was just imagining their entire relationship. Are their interactions flashbacks or hallucinations? We never find out! Frankly, Last Christmas failed either way. If Tom is a memory, it's odd that nobody in Kate's life ever mentions that she is mourning the loss of a former love. If Tom is a ghost, it's concerning that Kate realizes she's been having an affair with a god damn spirit, and brushes it off like it's nothing.

Although my last two brain cells had to work harder to understand the end of Last Christmas than they would to solve an advanced sudoku puzzle, I'm still pretty glad I saw it. Henry Golding is hot, and George Michael's entire discography slaps. I'll probably watch it next year when I need something playing in the background while I attempt to wrap gifts. 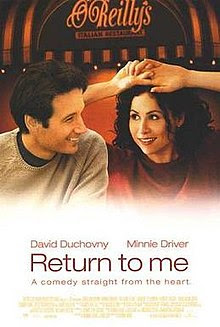 Bob and Elizabeth Rueland (David Duchovny and Joely Richardson) live and work in Chicago — Bob as an architect, Elizabeth as a zoologist at Lincoln Park Zoo.

On the night of her fundraiser for a new primate house, Bob promises Elizabeth he'll finish the building. Elizabeth is killed in a car accident leaving the fundraiser, and her heart is transplanted to artist Grace Briggs (Minnie Driver), who has suffered from heart disease since the age of 14 and is near death.

The surgery is successful; Grace is able to live a normal life for the first time and plans to make her first airplane trip to Italy to paint. Grace's best friend Megan Dayton (Bonnie Hunt), encourages her to start dating in spite of her self-consciousness about the long surgical scar on her chest.

Grace writes a letter to the donor's family after the surgery, thanking them for the heart she received; it takes her over a year to finally find the courage to mail the letter. Bob works to build the primate house Elizabeth raised money for; he is still depressed a year after her death. He recognizes that he must resume his life as he becomes frustrated seeing that his dog hasn't gotten over the loss either. His friend, veterinarian Charlie (David Alan Grier), organizes a blind date for him at O'Reilly's, a self-styled Irish-Italian restaurant. The date goes very badly, but Bob finds that he is interested in the waitress — Grace, who is also the granddaughter of the restaurant's owner, Marty O'Reilly (Carroll O'Connor).

Although they are both unaware of the connection they have through Elizabeth's heart, Bob and Grace begin to date. As they grow closer together, Grace is reluctant to tell Bob about her medical history. After several months of dating, Grace finally decides to tell Bob about her transplant. However, before she gets the chance, she finds in his house the letter that she had sent several months earlier. Horrified by the discovery, Grace flees and tells Megan what has happened. Megan's husband, Joe, (Jim Belushi) becomes infuriated as he has misunderstood Grace's panic and thinks Bob must be married. Megan then explains the situation to him in six monosyllables: "Grace has Bob's dead wife's heart!" When Grace meets Bob again, she tells him the truth. Stunned and not knowing what to say, he leaves.

Against Megan's advice to not run away from the situation, Grace goes to Italy alone. Back at home, Bob realizes that although he will always miss Elizabeth, he "aches" for Grace. He decides to go after her, and the two reunite in Italy. They return to Chicago for the dedication of the new primate house.

As the film ends we see Wally and Sophie dancing happily at their wedding reception at O'Reilly's restaurant, and Charlie holding Joe and a visibly pregnant Megan's toddler, while they join Grace and Bob on the dance floor.