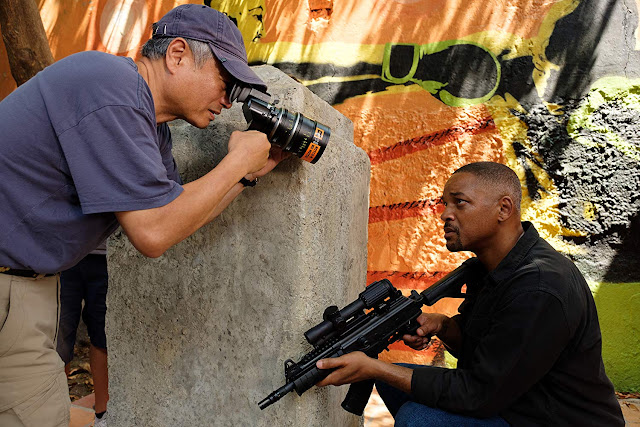 Digital youthification and deepfakery is the new frontier in studio movies, taking regular live-action films into a deeper uncanny valley. Martin Scorsese’s The Irishman features a young-looking Robert De Niro and now comes this very odd, dodgily acted, semi-intentionally bizarre action-thriller directed by Ang Lee and written by David Benioff, Billy Ray and Darren Lemke. It stars Will Smith as Brogan, a special-forces assassin who discovers his corrupt government paymasters are harbouring a secret and subsequently finds there is a new and worryingly familiar-looking young assassin in town. It’s a youngster who has, to coin a phrase, started making trouble in the neighbourhood.

This eerily recognisable young dude with the jarhead hair and lovable jug ears has been sent to take Brogan out – it’s himself, aged 23, a digitally rejuvenated Will Smith. This cloned version of Brogan was secretly created by his creepy boss Varris (Clive Owen) as part of Varris’s ethically suspect “Gemini project”, a boys-from-Brazil-type plan to create biotech copies of the very best warriors.

Joining forces with tough agent Danny (Mary Elizabeth Winstead) and plucky pal Baron (Benedict Wong), Brogan hits back against this techno-Freudian nightmare, travelling to Georgia, Colombia and Hungary – because Baron has somehow been able to borrow a Gulfstream jet to fly them everywhere. But worrying about the plausibility of that jet is beside the point when you’ve got Young Will Smith™️ running around the place.

The digitally de-wrinkled Smith isn’t great news for the career of Jaden Smith (the real-world son of Will) because this pseudo-young Will Smith is pretty realistic, in fact sort of on a par with the real thing – and the older Smith meets the digital youngster half way by being a bit more wooden than usual. So we could be in for Will Smith action movies for the next thousand years.

The technical effect of the film is strange. As with his last film, Billy Lynn’s Long Halftime Walk, Ang Lee is shooting in high frame-rate, which creates a new pin-sharp clarity but at the expense of making the film look like video – or like a celluloid movie on a plasma TV when you haven’t de-activated motion smoothing. It’s not a taste I want to acquire.

Some of the fight scenes are great, and there’s a rousing confrontation between Smiths young and old, involving some nifty leaping from roof to roof that reminded me of Lee’s cracking early film Crouching Tiger, Hidden Dragon. The juxtaposition of the real and digital faces gives the initial motorbike action scenes an interesting Grand Theft Auto effect. But the rest of the film is a very hard slog, with Smith in permanent danger of being upstaged by a handful of pixels, and Winstead and Wong sporting the slightly bemused-neutral expression of people having to react to a green screen – or perhaps that is the response Smith naturally elicits from his co-stars these days. And this solemn film never really cottons on to something that could have made it fly: the comic possibilities.

The digital novelty is striking for the first 10 minutes, silly for the next 10 minutes, and by the end of the movie you’re pining for the analogue values of script and direction. A wittier, smarter riff on everything could have saved this and Smith can play lighter material. Gemini Man has been born under an unfortunate sign.
Upplagd av Kultur Vinden kl. 14:09