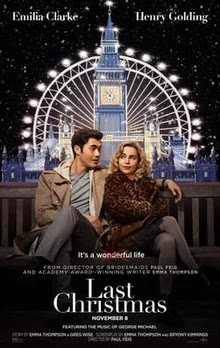 It might sound charming, but the vast majority of the movie doesn’t actually make any sense. More than 24 hours after seeing it, we still have so many questions, and we’re going to ask them here in no particular order.

Obviously, there are spoilers ahead for Last Christmas. It feels like common sense that if you haven’t seen the movie, you shouldn’t keep reading, but we’ll clarify that here just in case. Spoilers! Ahead!

Don’t get me wrong. I love George Michael. Like, so much. But other than the fact that his song “Last Christmas” adds an extra level ofaha! to the final twist, it feels so random to try to make this a George Michael movie. (Especially in a year when Yesterday and Blinded by the Light made full efforts at being movies about the Beatles and Bruce Springsteen, respectively.)

Kate’s supposed to be totally obsessed with George Michael, but other than a sticker on her suitcase and a poster in her childhood bedroom, the movie doesn’t offer up any tangible connections to the artist or his body of work.
Are we supposed to believe Kate actually thought her boss’s name was Santa?

Why did Kate not ask Tom a single question?

Surely, she could have sussed out the fact that he wasn’t a real person by asking him, like, a minimum of three personal questions.
Why was the phone thing not a bigger deal for Kate?

You know what is a great example of a personal question Kate could have asked Tom that might have determined if he was, in fact, a living human? “Why do you keep your cell phone in a kitchen cabinet?” If I went out with a guy who said he intentionally leaves his iPhone at home, I would run. That is some Ted Bundy–level shit right there. Major red flag.

Why hype up Yuletide as a year-round Christmas store if the movie takes place DURING CHRISTMAS?

Throughout Last Christmas, people marvel at the fact that Yuletide is a Christmas shop that’s open year-round. But why make that point so many times if it’s the holiday season anyway? In what world would someone see a Christmas store during the holiday season and be like, “LOL, that’s weird.” It would have been funnier to have this movie set in July.
Speaking of...
what even is the time frame of this movie?

Why do Kate’s neighbors have their house absolutely decked out with Christmas stuff but her parents don’t?

Like...how does that advance the story? Are we supposed to think Kate’s parents are anti-Christmas? It’s never addressed!

And HOW did they pull together enough money to make this concert as big as it was?

Why is everyone so mean to the dad?

WHAT DID HE DO TO ANYONE? And why did Kate sit in the back seat when her dad was driving her home? You’re family! Sit in the passenger seat!

Why was everyone so pissed at the mom?

Like...all she did was try to help her kids? And sing sad songs? Why did everyone hate her?!
What even WAS that ending?

Okay, it makes sense that Tom “gave” Kate his heart. But did they know each other before or were all their interactions simply hallucinations? It makes literally no sense.

And finally, did this movie have to exist?