FILM/TV: The Gripping History of The Looming Tower 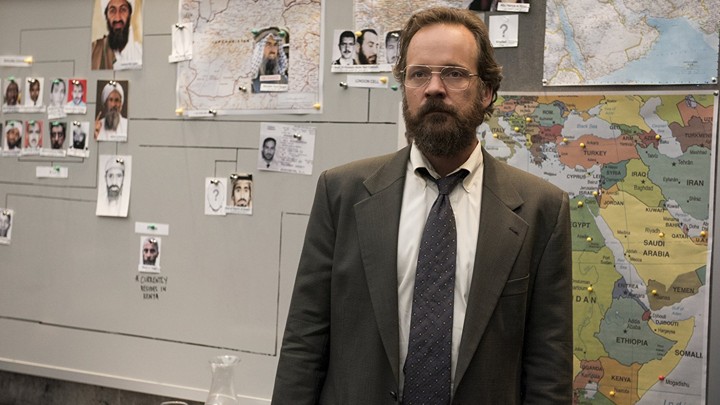 Peter Saarsgard in The Looming Tower.

The new Hulu series is a suspenseful, star-studded excavation of the failure to prevent.

In 2017, the third most-read page on Wikipedia.org was an article on Queen Elizabeth. Out of the top 50, Queen Victoria came in at No. 13, Princess Margaret at No. 37, and Prince Philip at No. 44. This sudden surge of interest in the British royal family wasn’t just Anglophilia: It was also related to the popularity of Peter Morgan’s Netflix show The Crown and the PBS/ITV drama Victoria. Both shows’ adaptation of historic events into modern entertainment had prompted millions of viewers to find out whether what they’d seen on TV had actually happened.

Wikimedia dubbed itself the “second screen,” pointing to a glut of recent series and TV films that re-create real-life moments with just enough latitude to spur the frantic impulse to Google the details—Paramount’s Waco, FX’s American Crime Story, and HBO’s Confirmation among them. The latest is The Looming Tower, the gripping new 10-part Hulu series adapted from Lawrence Wright’s Pulitzer Prize–winning 2006 book about the origins of 9/11. Like The Crown, The Looming Tower takes some dramatic liberties with its source material, turning some characters into composites and creating others anew. But most of what it portrays is true, and all of it seems intended to spur a new engagement with its material, seen through the clearer lens of historical distance.

Produced for television by Wright with the Oscar-winning documentarian Alex Gibney and the veteran showrunner Dan Futterman, The Looming Tower is a taut, tense restaging of the internecine squabbles between the FBI and the CIA in the lead-up to 9/11. Like Wright’s book, it makes the case that the failure of U.S. intelligence agencies to share information thwarted any chance they might have had of stopping the attacks. But where the book focused primarily on the people who conspired to orchestrate the worst terrorist attack on American soil, the series reorients itself around the people who failed to stop them.

On one side is John O’Neill (Jeff Daniels), a larger-than-life FBI counterterrorism chief grappling with the increasing threat of al-Qaeda. On the other is Martin Schmidt (Peter Sarsgaard), O’Neill’s CIA counterpart. O’Neill was a real person; Schmidt is reportedly an amalgam, although there are reasons beyond his initials to deduce whom he’s based on. From the very first episode, O’Neill and Schmidt are at each other’s throats for reasons that are hard to ascertain. Schmidt guards CIA intelligence with fanaticism, while O’Neill resorts to spewing profanities and epithets when he can’t get what he wants.

The show makes clear whose side it’s on. O’Neill might be a womanizing boor but his devotion to his job—and to thwarting attacks on the U.S.—is unmistakable. Schmidt, by contrast, is a pompous, sneering creep whose primary motivation seems to be power. (If both characters seem somewhat implausible, it appears that they’ve been tamped down for television, if anything.) In the three episodes made available for review, al-Qaeda emerges as an increasingly critical threat to America, perpetrating the 1998 bombings of U.S. embassies in Dar es Salaam and Nairobi, and gaining increasing financial and ideological support. But while Schmidt wants the president to respond by carpet-bombing Afghanistan, O’Neill argues that this will only draw more followers to the cause. And the hostilities between the two agencies mean information is hoarded rather than shared, hampering the pursuit of Osama bin Laden and al-Qaeda.

The show’s strongest scenes tend to involve good old-fashioned spycraft rather than intra-agency feuding. Bill Camp is exceptional as Robert Chesney, an FBI agent sent to Nairobi to seek out information, and a scene in the second episode where he interrogates a subject is a masterpiece in pacing, amping up the suspense for more than eight minutes. Tahar Rahim, playing the real-life FBI agent Ali Soufan, is similarly engaging, traveling to locales from Albania to London to hunt down al-Qaeda sympathizers. One of only eight agents out of 10,000 in the FBI who speak Arabic, Soufan is devoted to O’Neill and outraged by the radicals he sees as perverting the principles of Islam.

In O’Neill, Daniels has a character who’s innately charming, even if it’s hard to square the dark-haired, Mafiosi-esque character in Wright’s book, who has “a strong whiff of the Jersey streets about him,” with the actor’s patrician grace. (If Daniels falters, it’s in persuasively selling some of O’Neill’s cruder remarks.) Sarsgaard is smoothly villainous as Schmidt, running a team of mostly young, inexperienced women (the real-life CIA unit investigating bin Laden was nicknamed the Manson Family) and responding with remarkable hostility to anyone who questions him.

The action in early episodes plays out against the backdrop of the Monica Lewinsky scandal, itself apparently destined for a true-crime excavation by Ryan Murphy before too long. All of which urges the question—what do we gain from so many shows urging a new reckoning with not-so-old history? If dramas like American Crime Story seem intent on enabling a new interpretation of past events, The Looming Tower is a less grandstanding affair. Its mission seems to be simply dramatizing what happened, based on Wright’s 600 interviews and the (limited) information that’s emerged since his book was published. In the end, it’s up to viewers how they make sense of it all: assisted, as always, by Google.
Upplagd av Kultur Vinden kl. 07:17