FILM/TV: The Flash season 4 - Barry is back! 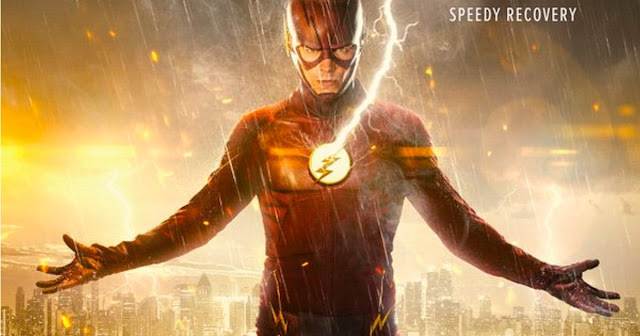 Grant Gustin as The Flash.


The Flash is back with a whole new season. A lot doesn't make sense. A whole lot. But season 4 is much, much better than season 3, and Barry is back on top! Almost, anyway.

After The Flash’s lackluster third season, what was once the crown jewel of The CW’s superhero lineup had fallen to unfortunate lows, mostly because of a poorly executed and repetitive villain (Savitar), and a fixation on one scene (the “death” of Candice Patton’s Iris) that we knew would never happen. The team had grown too large, the show didn’t seem to know what to do with any non-meta character, and dour emotional narratives suffocated what was once the most positive and upbeat of the network’s DC shows.

All of those series have gone through important course corrections in the past: Arrow had faced a similar slump in its third (and then fourth) seasons, and the series very specifically looked to rectify that in Season 5, with a focus on getting back to the show’s roots of tough vigilante justice. Similarly, after a messy opening season, Legends of Tomorrow remedied some of its major issues in Season 2 with a trio of excellent villains, and dumped the forced relationship drama to instead focus on a quip-filled team dynamic (it also stopped trying to pretend there were any rules to its timey-wimey storylines and just had bonkers fun — it worked). Supergirl changed networks, for the better, and thus it was time for The Flash to take a good long look at itself, and get back to its Season 1 roots: a fun superhero series that made the Villain of the Week formula work.

That wasn’t going to be an easy fix. One of the worst decisions at the end of The Flash’s third season was sending Barry (Grant Gustin) tra-la-la-ing back into the Speed Force. Although it has to be said, in the Season 4 opener, “The Flash Reborn,” things don’t seem to bad in a Barry-less world. Iris has finally been given a real job, for once, which sees her leading what’s left of the STAR Labs team in their quest to keep Central City safe. Cisco (Carlos Valdes) is using his Vibe powers regularly, Wally (Keiynan Lonsdale) is flying around as Kid Flash, while Iris’ new role means that she has taken on a Felicity-esque role as a kind of “Overwatch,” using tech and trackers to direct the team to their next case. And of course Joe (Jesse L. Martin) remains Team Dad, counsellor, and now chaplin.

Things are also much simpler with a streamlined team. HR (Tom Cavanagh) perished at the end of Season 3, and Harrison Wells 2.0 briefly returned to replace him. But now he and Jesse (Violett Beane) and Tracy (Anne Dudek) are nowhere to be found, and Julian (Tom Felton) has — rather unceremoniously — “gone back to London.” The result is that the show now has the space to give its core characters time to interact and have meaningful plot lines, even though the premiere is a little bit of a mess. Cisco works to retrieve Barry from the Speed Force (as we knew would happen), and his transition back is a little rough. But for the most part, the premiere wipes the slate clean, fixing a lot of the issues that plagued the end of the last season, and setting up a much more toned-down storyline. Most importantly, it’s brought back some fun.

It’s worth noting that for a little while, the show forces that fun a little too hard, but it’s a fake-it-til-you-make-it situation that doesn’t take long to smooth out. The second episode, “Mixed Signals,” is truly a delight. Here, again, the show takes time to focus on character relationships, and not just romantic relationships. There are fun storylines like Cisco stocking Barry’s new suit with tech that ends up turning on him, and emotional ones like Caitlin (Danielle Panabaker) continued struggle to control her inner Killer Frost. Each character starts the new season feeling like a refreshed version of themselves, with new narrative purpose. (Except, perhaps, poor Wally, who again gets instantly sidelined once Barry returns. How the show resolves The Flash / Kid Flash dynamic will be important moving forward, but for now, there’s enough else that’s positive to not get bogged down with that yet).

The series’ EPs have said for months now that Season 4’s villain would not be a speedster, and indeed, we see teases of the fabled Thinker in each new episode. The Thinker seems set up as an Alchemy-like villain who manipulates evil metas into The Flash’s path as part of some kind of masterplan, which is perfect. The Flash is a series that truly works best as a procedural (we even see Barry go to work once in these opening hours!), with the team finding creative ways to bring down Villains of the Week. By shrinking the team back to the essentials and introducing an expanded rogues gallery (controlled by a necessary, and for now distant Big Bad), the show could be poised to return to some Season 1 greatness. Barry is still working on being a hero again, but the series is confronting some of his hubris early on, especially in the way he has dismissed or run over Iris in her new role as team leader.

But Barry is back to being likable, which is a huge relief. It’s hard to dislike Grant Gustin, who has such a natural charisma, but the show surely tried. Now, it’s letting him (and us) have fun again with inventive speedster sequences, new ways of battling foes, as well as familiar (and drama-free) interactions among the team. We still have a long season ahead of us, but for those who were hoping The Flash might find itself again in Season 4, the future seems sunny.
Upplagd av Kultur Vinden kl. 05:06