FILM/TV: Designated Survivor: mash up 24 and The West Wing and throw it in the mixer! 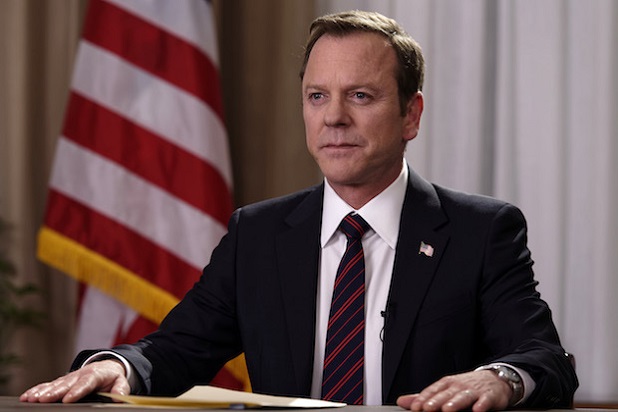 With Donald Trump in the White House, fictional Presidents are having a tough time holding our attention. So you have to hand it to Designated Survivor (Netflix) for surpassing even the real Oval Office for screaming melodrama. Looming nuclear conflagration, exploding planes and double-crossing spies are all on the menu as the reliably over-the-top political thriller returns for a second series, with Kiefer Sutherland still in situ as accidental Commander-in-Chief.

Sutherland’s Tom Kirkman is the "Designated Survivor" of the title: a minor ranking official whisked to a safe location whenever the President and other senior political figures are in a room together (should the worst happen, the country will continue to have an leader). Season one began with the President and most of the Washington establishment wiped out by a terrorist attack on Capitol Hill – leaving Kirkman, the not-very-high-flying Secretary of Housing and Urban Development, to step in as head of the Free World.

Twelve months later, Kirkman is still in office, plunging opinion polls notwithstanding, and has just pushed through a controversial $7 billion refurbishment of the devastated Congress building. However, urban renewal is soon the least of his concerns as Ukrainian terrorists hijack a Russian plane in Chicago.

A tense diplomatic stand-off ensues, with Kirkman’s mettle tested as it transpires an old friend is among the hostages. Meanwhile, in Amsterdam FBI agent Hannah Wells (Maggie Q) is on the trail of Patrick Lloyd (Terry Serpico), the international terrorist behind the assault on Congress. To this 24-esque tableaux of ticking clocks and frenzied punch-ups, Designated Survivor adds West Wing melodrama, with Italia Ricci’s Chief Of Staff and Kal Penn’s Communications Secretary among the underlings trading Sorkin-esque zingers in the background.

A less gung-ho actor might have gagged on some of the lines Sutherland is required to chew up and spit out. But he’s in full Jack Bauer mode when it emerges that Russia orchestrated the hijacking in the hope of reviving hostilities in Crimea. A stand-off with the Moscow ambassador ensues – the diplomat hastily backing down as it is revealed Kirkman speaks fluent Russian (a nugget Designated Survivor had never thought to mention previously and which mystifyingly cows the conspirators).

It’s just the sort of ludicrous, logic-defying twist you crave from a show in which a nostril-flaring Kiefer Sutherland plays the most powerful man on the planet. How ironic that those seeking refuge from the grim reality of real world politics should find it in a series about an unqualified outsider trying to hold together a chaotic Presidency.