FILM: The Darkest Minds - The dystopian stone has no more blood to let 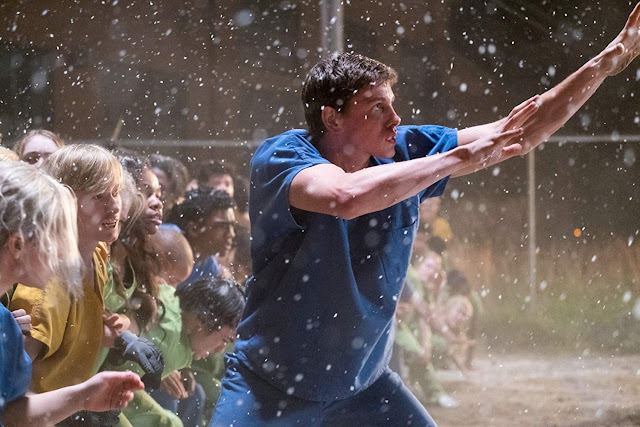 The Divergent Host Mazerunners of The 5th Wave are here! To compete with the X-men kids in the new Hungergames heading for Twilight. Yep, the Y.A. tropes come in droves!

Wouldn’t you know it, another faceless dystopian drama featuring teens situated in manufactured peril courtesy of the distrust and paranoia of the older establishment has made an appearance. After all, Hollywood must be vigilant in its continued efforts to tap into the teen movie-going market (this time courtesy of Alexandra Bracken’s 2012 novel “The Darkest Minds,” which is the first installment of her six-part literary series). The intent, obviously, is to capitalize on the Young Adult (YA) genre that has seen celebrated series such as “The Hunger Games,” passable series like “The Maze Runner,” and misfires like the “Divergent” film franchise.

With The Darkest Minds, director Jennifer Yuh Nelson (“Kung Fu Panda 2”) and screenwriter Chad Hodge (“This Time Around”) concoct a fading formulaic fantasy depicting alienated super-power adolescents bonding despite governmental conspiracies plaguing them. Although Nelson tries weaving into the mix the derivative dramatics of hormonal awkwardness, cynical imprisonment and the overall struggles of growing pains her junior-sized X-Men copycat is a rote, manipulative melodrama pandering to the lazy sentiments of its younger demographics.

In the future, everything is in disarray following a mysterious epidemic that managed to wipe out an insanely high percentage of people under 20-years of age. Interestingly, the savage virus also allowed surviving youngsters to inherit inexplicable mutant powers, like lead character Ruby Daly (Amandla Stenberg, “Everything, Everything”), a 16-year old telepathic teen whose psychic mind control powers make her a hot — and dangerous — commodity to the powers that be. Unfortunately, Ruby and other gifted youngsters blessed with unusual super-powers (shooting lightning bolts from hands, telepathically moving objects, etc.) are relegated to confinement in government camps, grouped by colors according to their supernatural prowess (Red: Pyrokinesis; Orange: Mind Control; Yellow: Electricity Control; Blue: Telekinesis; Green: Enhanced Intelligence).

Soon, Ruby manages to escape the clutches of her captors and hooks up with a wandering crew of cast-offs — charged-up Zu (Miya Cech, “American Horror Story” TV series), geeky genius Chubs (Skylan Brooks, “Southpaw”) and tall and lanky leader Liam (Harris Dickinson, “Beach Rats”). Their hope is to escape to a fabled safe haven and join a rebellious outfit of youths who harbor the same special powers as they do. To get there, the power pack quartet skillfully ducks and dodges Lady Jane (Gwendoline Christie, “Star Wars: The Last Jedi”) and other bounty hunters, and intrusive governmental hound-dogs, all while dealing with a smoldering, puppy dog love connection between Ruby and Liam.

Relentlessly lightweight and as soggy as a drenched handkerchief, The Darkest Mindsshines no distinctive or original forethought into its callow construction of transparent Harry Potter-esque overtones. Undeniably tame and tedious, Nelson fortifies this baseless teen-friendly spectacle with peppered-down thrills presented both as an indigestible romancer and toothless commentary on restrictive authoritarian scrutiny.

The whole mind-bending display of wiping out memories, zapping people and objects with jolting bolts and showcasing a troubled foursome of youths lost in a weary world of grown-up corrosion in the near-future comes off as woefully clichéd and contrived. The staged action sequences lack energy, purpose, and intrigue. As the angst-ridden pair — bubbly Ruby and brooding Liam tease their vague attraction for one another — both performers Stenberg and Dickinson make for a photogenic twosome, but their on-screen chemistry has all the depth of a smitten Cookie Monster chomping on a bag of Oreos. The adult participants in this paper-thin thriller, like the token caring adult Cate (Mandy Moore, “47 Meters Down”) and the maligned politician behind the societal mayhem President Gray (Bradley Whitford, “Get Out”), come off as an afterthought in the notoriously rudimentary proceedings.

Consequently, The Darkest Minds plays like an overwrought, sluggish, kiddie-coated super-powered act that seriously lacks any satisfying qualities. Its best attribute is in telling studios it’s high time they left the YA genre alone to gather dust on library bookshelves. The fad has passed, the stone has no more dystopian blood to let.
Upplagd av Kultur Vinden kl. 08:31