Travelers in the Third Reich by Julia Boyd 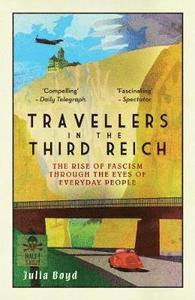 Historian and biographer Julia Boyd opens her riveting “Travelers in the Third Reich” with this anecdote: “Imagine that it is the summer of 1936 and you are on honeymoon in Germany. The sun is shining, the people are friendly — life is good.” Suddenly, out of nowhere a “Jewish-looking” woman approaches. “Radiating anxiety, she clutches the hand of a limping teenage girl wearing a thick built-up shoe.” The woman has seen the GB sticker on your car and begs you to take her daughter to England. Lately, you have heard disturbing rumors about Germany’s Jews and even talk about euthanasia for the unfit — how do you react to the woman’s desperate plea? “Do you turn your back on her in horror and walk away? Do you sympathize but tell her there is really nothing you can do? Or do you take the child away to safety?”


Astonishingly, the real-life newlyweds didn’t make the excuses that you or I would probably have made. They drove off with the young Jewish girl in the back seat of their car and when they left Germany, so did she.


While there have been countless books written about the rise of Hitler, “Travelers in the Third Reich” relies on firsthand accounts by foreigners to convey what it was really like to visit, study or vacation in Germany during the 1920s and ’30s. Throughout, Boyd draws on contemporary letters, diaries and memorandums written by diplomats and politicians, college students, social workers, famous authors and Englishwomen married to Germans. Two of her most unexpected witnesses are the African American historian W.E.B. Du Bois, a devotee of Wagner’s operas, and the Chinese scholar of Sanskrit Ji Xianlin. Shockingly few of these observers managed to see through the Nazis’ smoke and mirrors.

Right up until the late 1930s, Germany was successfully promoting itself as the ideal place to vacation, its smiling people overflowing with gemütlichkeit and eager to please, unlike the stuck-up and dirty French. “By 1937 the number of American visitors to the Reich approached half a million per annum,” Boyd reports. After all, the land of Goethe and Beethoven had much to offer: Picturesque scenery, lots of theater and music, delicious beer and sausages, the best universities in the world, the popular Oberammergau Passion Play and even a youth culture that fostered politeness and self-denial, along with physical health, team spirit and patriotism. What’s more, the country was full of attractive blonds, of both sexes: “Over 10 million packets of hair dye were sold in 1934.” There seemed, in short, much to admire, not to say envy, in the new Germany.

As usual, most tourists regarded it as rude to comment on, let alone criticize, their host nation’s internal affairs. However, they generally came home convinced that the Führer was a man of peace, not just the country’s George Washington — as former British prime minister David Lloyd George called him— but practically a saint. He had restored pride and purposefulness to a beaten-down people; he was remaking Germany into the great nation it deserved to be.

As Boyd stresses, the Nazis were expert propagandists, constantly promulgating the notion that they were the chief bulwark against the Russian-Jewish-Bolshevik menace. Foreign dignitaries who met Hitler invariably remarked on his charm; one described him as “courteous, quiet, patient.” When ambassadors and tycoons toured the labor camps to which misfits and “degenerates” had been sent for “re-education,” they were always impressed by the ruddy health and cheerfulness of the inmates, never realizing that they were looking at the camp guards in disguise. Naturally, all public spectacles — like the Nuremberg rally of Leni Riefenstahl’s propaganda film “Triumph of the Will” — were carefully stage-managed for maximum emotional effect. Most of the assemblies and parades were noisy affairs, ringing with “Sieg heils!” but the Reich also understood the power of silence. One Bryn Mawr student recalls a midnight procession honoring the 16 Nazis — by then viewed as martyrs — who had been killed during Hitler’s abortive 1923 putsch:

“We stood on one corner for about four hours. . . . Troops and troops of soldiers, SS men, SA men, Hitlerjugend, veterans, etc. filed by steadily for three hours in the dead of night — no drums, music or anything — all perfectly solemn and tragic. . . . Even when Hitler went by there was to be no ‘Heil Hitler,’ but one or two people couldn’t restrain themselves from yelling and were quickly hushed.”

Throughout the interwar years many people believed the Nazis’ reassuring mendacities because they wanted to. Germany was on the move again. Industry was booming. Hitler’s totalitarianism, strongly supported by his insanely enthusiastic base, made democracy seem lax and messy. When some diplomats and nearly all the foreign journalists sounded the alarm about the dictator’s demagoguery, lies and racism, it was simply assumed that “the journalists and diplomats had got it wrong.” Frank Buchman, founder of the conservative religious group called Moral Re-Armament, actually hinted that Hitler might be an agent of the divine. As he said in 1936, “Through such a man God could control a nation overnight and solve every last bewildering problem.”

There was certainly a solution, a Final Solution, for the “Jewish problem.” Yet from the beginning, Hitler and the Nazis demanded more than lickspittle submission to their foul programs and beliefs. As Swiss scholar Denis de Rougemont noted in his journal: “Anyone who does not demonstrate joyful ardour in the service of the Party is denounced.” Nonetheless, despite the anti-Semitism, book-burning and brutal silencing of the regime’s critics, American and British families continued to send their daughters to Germany to be “finished” and their sons to study at its universities. How could they?


As Julia Boyd emphasizes, too many people allowed reverence for a nation’s glorious past to warp their judgment about its morally repugnant present. That’s a lesson still worth thinking about.