FILM: Hacker - Canadian drama about how to get rich quick.

Hacker - A Sting in the Tale! 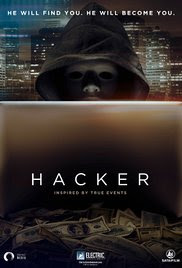 Plot: With the help of his new friends ukranian immigrant Alex Danyliuk turns to a life of crime and identity theft ...


In the wake of Mr. Robot, this movie tries to make the best of cashing in on the Hackers hype. But this movie isn't so much about hacking as about scamming and wierdly enough a lot of the plot is centered around a social media page for hackers called the dark web - and everyone wants a "like" from the notorious Zed.

The dark web isn't a social media site! This movie is so ridden with faults and plot holes!

Like this ... Alex explains that he is "saving up for college," but no Canadian would refer to university as college. Or save up for it.
College in Canada and the UK is either a practical training (which is free) or community college.

The actor playing Alex refers to himself early in the movie as an "adult" with an accent on the second syllable, while every Canadian - including Ukrainian and Russian immigrants - would place the accent on the first syllable. In other words, he was using an American accent after having grown up in Canada.

For any real hackers (aspiring hackers, hacktivists, otherwise criminally engaged computer wizards, or simply people in general who know their stuff) it's probably best not to touch this movie ... but to people who hardly know anything about the world of hacking, who can enjoy a lower tier "morally justified" heist movie, it might work pretty well.

That said, the plot is dull. Really dull. Perhaps not so much the plot itself, but rather the execution of it. It's pretty obvious (from the narration, the cast) that this movie was meant to piggyback on the hype-train of Mr. Robot. Whereas Mr. Robot actually goes into detail pretty accurately, there's hardly ANY hacking going on in this movie at all. It's just a bunch of scammer kids, with a very infantile approach to the hacking phenomenon. A mash-up of jargon, combined with really poor dialogues and acting skills in general. A "hacker" that isn't familiar with the Dark Web or Onion? I mean, really?

Apart from that, it has a nice pace with just enough going on, to maintain a certain entertainment value and the movie has a nice twist at the end... albeit pretty far fetched. Or rather very, very far fetched.