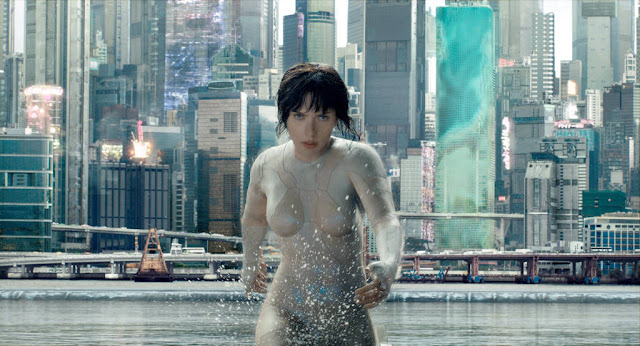 There are really only three reasons for movie remakes: 1) Technology has improved to such a degree the quality of the production will almost certainly be better, 2) a successful foreign language film will be made in English to snare a wider audience, or 3) as Disney is doing at the moment, animation is being re-imagined as live action — you know, for those people who will not see “cartoons.” This “Ghost in the Shell” is all three.


Over 20 years in the planning stages, director Rupert Sanders’ (“Snow White and the Huntsman”) overhaul of the 1995 anime classic of the same name is being attacked from all sides for one, two and/or three of the above reasons simply because it exists.


Is it as good as the first? Not by a long shot, but then again it’s being targeted to a (mostly) different audience that’s totally unaware of the first and couldn’t care less about it. In the 22 years since its release, director Mamoru Oshii’s original has grown to become one of the biggest cult flicks of all time, and the small legion of those die-hards are going to regard the new movie as a travesty and will pick it apart. Their displeasure will have next to no effect on the success of this film, which will sink or swim on its own.


Starting with an opening title sequence that practically mirrors its predecessor, it’s clear Sanders and his three screenwriters are paying homage to the 1995 movie without making a carbon copy while also tweaking the narrative. Longer than the original by about 30 minutes, the new version eliminates some of the minor dramatic passages and has replaced them with what most audiences of these kind of movies want: action and more action.


Not long after the death of a young woman by drowning, a team of doctors and cyber specialists transplant her brain into the head of Major (Scarlett Johansson), a completely synthetic being designed to be a weapon for a spy agency specializing in investigating and thwarting cyber hacking. With a team of racially/gender-balanced underlings, Major’s first assignment is to locate the mysterious Kuze (Michael Pitt), the mastermind of a series of terror attacks that target humans who are related in some form or fashion to a covert program overseen by Cutter (Peter Ferdinando), the owner of the company that bankrolled Major’s design and creation.


Veteran Eastern action star Takeshi “Beat” Kitano appears as Aramaki, an employee of Cutter’s company whose job is to act as a liaison of sorts between the company and the government. The only reason Cutter keeps Aramaki around is because it is required by law. Saying little and when doing so, only in Japanese, Kitano delivers all of the comic relief and steals every scene in which he appears.


Although speaking just Japanese, Aramaki fully understands English, and those speaking English to him fully understand Japanese, which is impressive but also has a crippling effect on the disbelief factor. This could have been easily remedied in one of two ways — either provide Aramaki with a full-time translator or set the story in an English-speaking country.


Fans of the original and many left-leaning members of the press have worked themselves into a lather regarding the Westernization or “whitewashing” of the movie, and, to some degree, they have a point. If Major is Asian, why not cast the part with an Asian actress? The short answer is that Johansson is one of the biggest box office draws on the planet with action experience (“Lucy,” “The Avengers”), and there is no Asian actress with her level of clout. Of the dozen or so other principal characters, only one is played by an Asian performer whereas every character in the original was Asian, albeit of the animated variety.


Setting the story in the U.S. or the U.K. would have been perfectly fine and squashed the entire PC bellyaching without having any impact whatsoever on the core story or the global box office. Recent polls have indicated that most Asian movie fans have no problem with the casting of Johansson, which leads one to discern this is a non-issue concocted by snowflake groups that thrive on imagined racism, hysterical bigotry and faux social inequality.


Those unfamiliar with the first — many of whom are also big fans of action franchises — won’t care that the filmmakers radically altered the ending of the original, which, of course, was done to leave the door open for at least one sequel if not more. This is not surprising and makes all kinds of sense from a business perspective. Movies exist for two reasons: to entertain and make money. If they happen to enlighten or educate along the way, well, that’s all the better. Slightly revamping a 22-year-old movie most people have never heard of isn’t artistic sacrilege or cultural theft; it’s making something more people will see while making a profit. It’s American capitalism at its most efficient. Bravo.