FILM/TV: Game of Thrones - the best show on TV (but not the most logical) 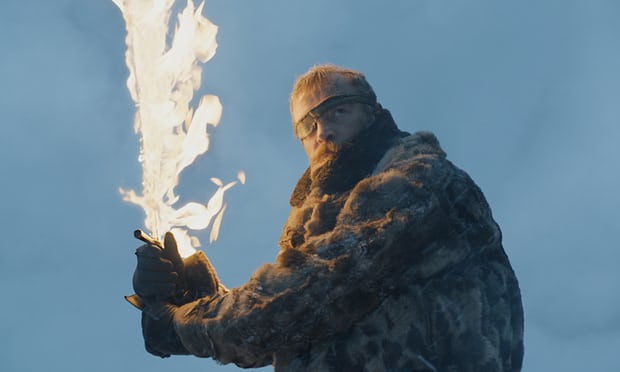 A criticism commonly levied at recent episodes of Game of Thrones is that characters suddenly appear to have developed the ability to teleport from one side of Westeros to the other with no more than a crinkling of their noses.

Jon was in Winterfell. Then Dragonstone. Then all of a sudden he was north of the Wall on some harebrained scheme to kidnap a Wight. Whereas previous seasons would have dwelled on the minutiae of trudging from place to place, mining rich seams of character development along the way, this one has more world-ending matters to deal with than spending five episodes watching Jon and chums amble up a snowy hill. So it doesn’t bother. And while I reject the “teleportation” criticism – they don’t tend to show characters on the toilet either, because that too would be irrelevant to the plot – it is indicative of a deeper issue with the current series: that it’s become blindingly obvious seven episodes is simply not enough. The producers’ decision to shorten the episode count from 10 did make each episode a thrilling set piece. The problem is that they’ve been trying to cram so much into each, little things like “logic” and “character” have burst out of the seams. 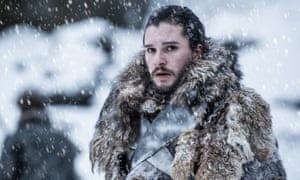 This season has more world-ending matters to deal with than spending five episodes watching Jon and chums amble up a snowy hill – so it doesn’t bother. Photograph: HBO

Take this week’s episode, which alone gave us a panoply of huge, plot-altering events. We got a couple of fairly high-profile deaths in Benjen Stark and Paul Kaye’s Thoros. Arya basically threatening Sansa with a Littlefinger-approved DIY face-ectomy. So much Dany/Jon flirting you could cut the incestuous tension with a Valyrian steel dagger. Dany and Tyrion having a big falling out. A brilliant and very cold-looking battle. More dragons. An actual zombie bear. And then, the piece de resistance: the Night’s King getting a blue-eyed dragon all of his own.

Game of Thrones recap: season seven, episode six – Beyond the Wall
Expect stabbings and stand-offs as an epic battle takes over this penultimate episode that would have been great fun to watch … if only the plot made sense

Massive stuff. Game-changing, some of it. It was another exciting, bravura hour of telly. But did any of these events land with the weight they deserved? Or did they all whizz past at such a relentless clip that none really had time to register? And did any of the characters do or say anything remotely plausible for the entire episode? No they did not.

The first five minutes of Beyond the Wall consisted almost entirely of characters telling each other exactly what they thought of them in great granite slabs of exposition, as opposed to giving relationships space to percolate slowly and organically as the show has done so adeptly in the past. It felt clunky and forced. Then the action started, and everything got a bit silly. Huge leaps of logic aside – how long would it take a raven to fly from the Wall to Dragonstone anyway? Why does killing a White Walker make all his subservient Wights disappear, bar one? – the characters felt like they were little more than window-dressing as the narrative groaned and twisted to see to it that Dany joined the war against the Walkers and the Night’s King got his dragon. It often feels as if the tail’s wagging the direwolf. 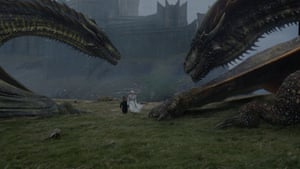 In a show full of dragons and magic, it’s strange that the humans are starting to feel fake. Photograph: HBO

Characters used to act, and plot used to unfurl, in ways that felt real; that’s what gave this geeky genre series about dragons and magic its global crossover appeal. Now? We know Jon will be part of the larger battle to come, so we knew he hadn’t drowned. The Night’s King needed a dragon, so the plot gave us a half-baked reason – Dany coming to a profoundly unlikely rescue – for him to get one. Sansa sends Brienne away because the plot requires her to be unprotected, nothing more. Characters aren’t so much pieces being moved on a board than the board is being moved under them, credulity be damned. In a show full of dragons and magic, it’s strange that the humans are starting to feel fake.

To the series’ credit, if you are going to paper over gulfs in logic, the best way to do it is with explosions, zombie bears and flaming swords. Every episode is a tantalising prospect as the story gallops towards a conclusion like a windmilling drunkard, and none have disappointed so far. The pace hasn’t let up all season. It’s physically impossible to dislike a programme this relentlessly, air-punchingly entertaining.

So it’s still the best show on TV, and I will have an inappropriately passionate argument with anyone who claims otherwise. It’s just a shame it’s also now one of the daftest.