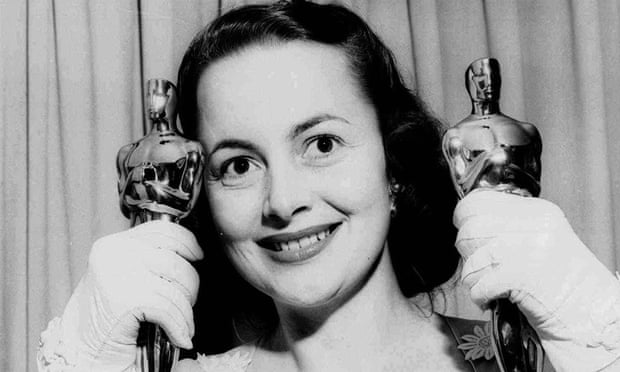 Olivia de Havilland in 1950 with her Oscars

Olivia de Havilland, the fragrant queen of the Hollywood costume drama, has died at the age of 104.

According to the Hollywood Reporter, her publicist said she had died from natural causes in Paris, where she lived.

While De Havilland won two best actress Oscars – for her roles in 1946’s To Each His Own and 1949’s The Heiress – she remains best remembered for her performance as stoical Melanie Hamilton Wilkes in the 1939 classic Gone With the Wind.


Born in Tokyo and raised in California, the older sister to fellow actor Joan Fontaine, De Havilland made her screen debut in Max Reinhardt’s lavish 1935 adaptation of A Midsummer Night’s Dream. She went on to shoot eight collaborations with Errol Flynn, including turns in Captain Blood, They Died With Their Boots On and The Adventures of Robin Hood.

De Havilland’s specialty was the demure, soulful beauty. “Playing bad girls is a bore,” she once claimed. “I have always had more luck with good-girl roles, because they require more from an actress.” But the actor’s soft exterior concealed a core of steel. In the 1940s she successfully sued Warner Bros in a landmark ruling that helped break the stranglehold of the US studio system. “I was told I would never work again, if I won or if I lost,” she later recalled. “[But] when I won they were impressed, and didn’t bear a grudge.”

De Havilland did indeed continue to work, most notably rustling an acclaimed portrait of mental illness in the 1948 drama The Snake Pit. But the screen credits dwindled following her move to Paris in the mid-1950s. She appeared in Lady in a Cage, Robert Aldrich’s Hush … Hush, Sweet Charlotte and the 1970s TV miniseries Roots: The Next Generation. Away from the cameras, she preferred teaching Sunday school at her local church.

She was awarded the National Medal of Arts in 2008 and briefly emerged from retirement to narrate the 2009 Alzheimer’s documentary I Remember Better When I Paint. In 2018 she launched a legal action against the TV show Feud: Bette and Joan (about the rivalry between fellow stars Bette Davis and Joan Crawford), but the suit was thrown out of court.

In later life, she insisted, acting had largely lost its allure. “Life is too full of events of great importance,” she told one interviewer. “That is more absorbing and enriching than a fantasy life. I don’t need a fantasy life as once I did. That is the life of the imagination and I had a great need for it. Films were the perfect means of satisfying that need.”