THE NEW WHO!
The next star of Doctor Who has been announced after intense speculation – and the person stepping into the role of Time Lord is Jodie Whittaker.
She is the first woman to take on the role, playing the 13th Doctor in the BBC1 drama. Whittaker, who rose to fame in ITV’s crime drama Broadchurch, had been touted as one of the contenders.
Debate has been whirring over who would play the Doctor ever since Peter Capaldi announced in January that he was leaving the programme.
Chris Chibnall, Doctor Who’s new head writer and executive producer, said: “After months of lists, conversations, auditions, recalls, and a lot of secret-keeping, we’re excited to welcome Jodie Whittaker as the 13th Doctor.
“I always knew I wanted the 13th Doctor to be a woman and we’re thrilled to have secured our number one choice. Her audition for the Doctor simply blew us all away.
“Jodie is an in-demand, funny, inspiring, super-smart force of nature and will bring loads of wit, strength and warmth to the role. The 13th Doctor is on her way.”
Whittaker said: “I’m beyond excited to begin this epic journey – with Chris and with every Whovian on this planet. It’s more than an honour to play the Doctor. It means remembering everyone I used to be, while stepping forward to embrace everything the Doctor stands for: hope. I can’t wait.”
On 4 July, BBC2’s current affairs programme Newsnight appeared to reveal the identity of the new Doctor. Presenter Evan Davis said: “Bookies’ favourite Phoebe Waller-Bridge has denied claims that she’s going to be the first female Doctor. But then, Joanna Lumley has already played the role for Comic Relief, so that would technically be true.” 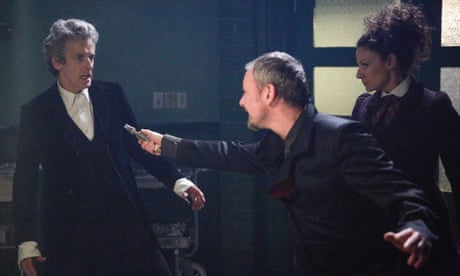 'I wish I'd burst into tears' – as Steven Moffat writes out Peter Capaldi, what’s next for Doctor Who?

Read more
Emily Cook, editorial assistant at Doctor Whomagazine, said: “I am very excited about this. As soon as I saw Jodie Whittaker appear on the video in the BBC clip announcing her, it just felt right – she just felt like the Doctor. Having a female Doctor is really exciting and significant. I cannot wait to see what she does with the role and where she takes the show.

Erica Lear, the social secretary at the Doctor Who Appreciation Society, said: “I think it’s very brave but she is a brilliant actress. I did not expect it but I think it’s brilliant. My only wish was that we have a good actor and that is what we have.”“She will bring a freshness. She is younger thanPeter Capaldi and, being a woman, she will have a different approach to the role. It’s completely new territory for the show and that is very exciting. Whittaker has worked with David Tennant on Broadchurch and St Trinian’s so there is a strong Doctor Who connection there.”
But Lear noted that the appointment might divide opinion. “It will spark debate and split fandom; there will be lots of people not happy with the decision but it’s up to the new series to change their mind.”
Sebastian J Brook, site editor at Doctor Who Online, said: “Today’s announcement has been a shock for many fans, but this is a show about change, and perhaps now is the time that we all get behind the idea of a female Doctor?”
Brook added: “I must admit, I’ve always been of the opinion that the Doctor is and should be a man. He has always identified as male in the series, and after 50+ years, it’s certainly going to take some getting used to, but I support the show and Jodie is a fantastic actress, so she gets my full support, too.”
Capaldi said: “Anyone who has seen Jodie Whittaker’s work will know that she is a wonderful actress of great individuality and charm. She has above all the huge heart to play this most special part. She’s going to be a fantastic Doctor.”
Colin Baker, the sixth actor to play the role, from 1984–86, also applauded the decision.