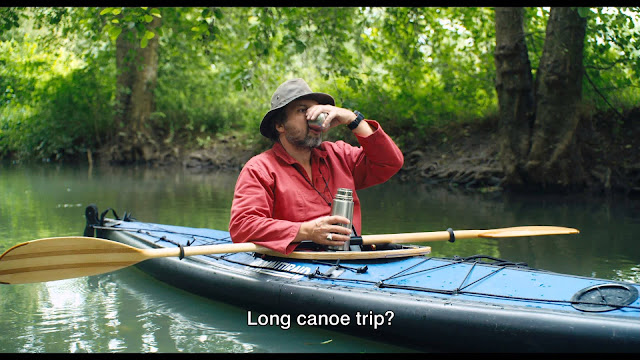 
Feather-light, yet finally profound and packed with both visual ideas and delightful banter, The Sweet Escape (Comme un avion)from French filmmaker Bruno Podalydes is another home run. Taking the lead in one of his own films for the first time, the actor-director here plays a postal plane-obsessed 50-something who finds himself drawn to kayaking simply because the wooden skeleton of a kayak looks like an old-fashioned plane’s wing. But his voyage on his “wingless plane” — the more evocative French title refers to a 1981 hit song from Charlelie Couturethat translates as “Like a Plane Without Wings” — isn’t about taking off so much as floating downstream on a picturesque brook in the countryside, not necessarily in control of the current. With four- and five-star reviews in all the local media, from left- to right-wing papers and both high- and low-brow outlets, this Escape stands a good chance of being hailed as one of this year’s most noteworthy French movies.

The one quality that unites all of Podalydes’s directorial efforts is a lightness of touch that seems to have come from another era, whether he’s making serio-comic period mysteries such as his Gaston Leroux adaptations, The Mystery of the Yellow Room and The Perfume of the Woman in Black, or modern dramedies such as his most recent film, Granny’s Funeral, with its constant barrage of text messages (evolving technology is a clear leitmotif here, too). Though those films all revolved around a crime or a death, what’s impressive here is that there’s no major drama to speak of, and yet the director’s signature mix of bittersweet melancholy and airiness is not only still very much present, but actually more conspicuous than ever, with its frequent plane metaphors and in its original title.


Podalydes, who rarely appears in other directors’ work and until now only had supporting roles in his own films, here plays Michel, a designer at a computer graphics studio run by Remi (the director’s brother and regular collaborator, renowned Comedie-Francaise actor Denis Podalydes), to perfection. Michel’s happily married to Rachelle (Sandrine Kiberlain), who indulges his obsession with postal airplanes, pictures and models of which are all over the couple’s house, while Antoine de Saint-Exupery’s classic novel Night Flight is on his nightstand, bien sur.

So why isn’t he happier when his friends surprise him for his birthday with a three-hour plane ride? Because what makes Michel dream about pilots and flying is the utter freedom associated with simply taking off and going wherever and whenever you want. So having others reserve you a seat for three hours is about the worst thing that could happen. Clearly, Rachelle knows him better than anyone, as she finally pushes Michel to take his assemble-it-yourself kayak — which he earlier bought in secret, just for himself — and take to the waters, or at least the apparently calm and picturesque creeks of Burgundy,and adjacent Centre-Val de Loire.


In the early going, the actual story is always pretty straightforward, but there are lots of small scenes that enliven the proceedings and add character piquancy, narrative bite or visual flair. An apparently simple overhead shot of Michel spinning around in his office chair suggests both how, professionally, he’s stuck in a vicious circle, and also how movement is needed to snap out of his same-samey day-to-day routine. An encounter with a feisty neighbor (regular collaborator Noemie Lvovsky, in a delicious cameo) is also brilliantly staged, as the gigantic cardboard box in which his kayak came separates the two in the elevator and is transformed into a confessional for her. The audience thus discovers she’s been trying to make a move on Michel for a while, despite the fact they are both married. His reaction to her advances, on home ground, stand in stark contrast to Michel’s evolution later in the film, in the Great Wide Open, thus allowing audiences to clearly see his character’s evolution. And the scene’s punchline is both hilarious and tragically sad, with the characters’ actions and feelings on both sides not the stuff of comedy caricature,
but actually grounded in recognizable human behavior, a Podalydes hallmark.


The second half of the film, in which Michel takes to the waters, sees the introduction of some water-borne mishaps, of course, but very little in the way of actual mileage. Rather quickly, the protagonist ends up at a tavern in the forest run by the merry widow Laeticia (Agnes Jaoui, revealing her more radiant side) and her young help, Mila (Vimala Pons, who played Granny as a young woman in Granny’s Funeral). Always nearby are two older gentlemen (Podalydes regulars Michel Vuillermoz and Jean-Noël Brouté) who are busy with oil drums, rope and paint and who bring to mind a rural version of Tintin’s bowler-hatted comic-relief duo Thomson and Thompson. Another cameo by a Podalydes regular, veteran actor Pierre Arditi as a cantankerous fisherman version of himself, will fly way over the head of non-Francophiles but is a hoot for those in the know.


Michel tries to leave every time but keeps coming back to the same place, courting the attention of both women in the process. The beauty of Podalydes’s screenplay is that there’s never a sense of extramarital transgression. Instead, there’s a sense that a measure of individual freedom is not only necessary but actually healthy for personal growth and happiness. The film seems to suggest that perhaps we can’t all fly postal planes over foreign lands but it’s possible for everyone to find their own equivalent of paddling along in a brook not that far from home. And the fact Michel keeps coming back to the same tavern to break free of his own life’s monotony is a cheeky suggestion on Podalydes’s part that life has a way of repeating itself, even when you’re thinking you’re doing something radically different.

Visually, the film’s full of movement, with ace cinematographer Claire Mathon (Stranger by the Lake) making the most of the fact that the film’s mostly shot outdoors, even if some of  the most memorable shots occur indoors. There’s also a quite sophisticated interplay between shots spread out throughout the film. For example, an early symmetrical composition of Rachelle and Michel in the bathroom, with each visible in a separate mirror, is later echoed by shots of Michel and Laetitia, divided by a sheet, and Michel and Mila, divided by a piece of cardboard, further suggesting how Michel’s home life is different, and without any physical divisions, from his dalliances in the outdoors. Rather delightfully, the moral of the story surfaces offhandedly in a post-coital conversation with one of the ladies Michel is not actually married to.


What finally sets this film apart from its countless brethren in which nothing much actually happens, is Podalydes’s brilliant command of tone. The surface actions are grounded by an underlying melancholy that suggests that even something as seemingly straightforward as happiness can be a profound and complex emotion.