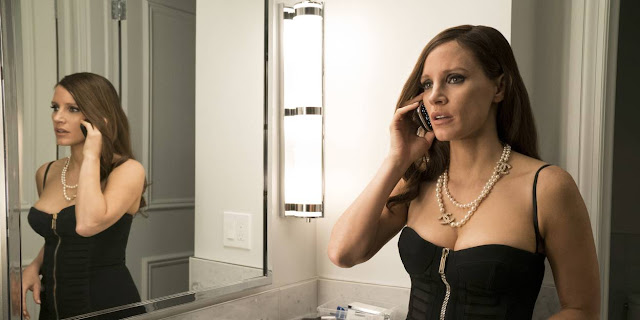 She certainly is. America’s so-called Poker Princess, Molly Bloom, is the enigmatically glamorous woman in this very enjoyable true-life story who ran the hottest private card game in LA and then New York, before finally being led away in handcuffs in 2013 on illegal gambling charges. Luxurious hotel suites had been turned by Molly into macho gladiatorial arenas in which movie actors, sports stars, hedge fund managers and other wealthy poker addicts did battle under her gaze. There were no women players – a fact on which the film passes no comment.

Models were hired to serve drinks. Scented candles masked the reek of testosterone and rage. And Molly presided over it all, monitoring the bets on her laptop in the corner, wryly commenting on the Joycean echoes in her name (she repeatedly had to say no to these men) and accepting huge tips at the end of the night. She is played with exotic queenliness by Jessica Chastain, with something of the impassive hauteur and mute vulnerability that Elizabeth Taylor brought to Cleopatra. But who is Molly’s Antony? Does she even need an Antony? Of this, more in a moment.

Screenwriter Aaron Sorkin lets rip with another marathon-sprint of exhausting and exhilarating and exasperating dialogue, in the process switching up his game to hyphenate status, and making a very stylish debut as director. As ever, every character is turned into a motormouth marvel of hyper-articulate savvy.

There is much verbal headbutting on the issue of who is the smartest guy in the room – of whichever gender – and also a good deal of Sorkin’s trademark daddy issues. Could all this aggression and backtalk be an attempt to win some long-lost, intimately painful and humiliating dinner-table argument with your father?

Molly’s Game is, in its way, a Malcolm Gladwellian film, with Ted-talking insights about how people smarter than you have become more successful than you. It’s a bit like Bennett Miller’s Moneyball (also scripted by Sorkin) about a baseball manager using stats to beat the world, or Adam McKay’s The Big Short, about maverick dealers shorting the market and doing well out of the 2008 crash. However, Molly’s Game is thankfully without The Big Short’s dubious and overpraised need to confer underdog-hero status on successful moneymen. This film doesn’t posture, but has the air of letting you in on a tasty and unwholesome secret.

Chastain very plausibly portrays an ultra-competitive person who was once an Olympic-level skier, trained to the brink of abuse by her coldly demanding father, played by Kevin Costner. Injury puts Molly out of the skiing business; in despair she starts working as PA to a rich asshole who gets her to manage his regular poker night with other rich assholes. She takes it over, and turns it into her own poker salon for fashionable Hollywood types – perhaps inspired by the poker game in Steven Soderbergh’s Ocean’s Eleven.

Molly instinctively affects a style of cleavage-revealing dress which is sexual but not sexually available. She entices rich men into her game but cleverly deflects their predatory instincts into the alpha poker-fight with other men. A movie actor, known as Player X (reportedly based on Tobey Maguire, and played here by Michael Cera), becomes obnoxiously resentful at her failure to find him attractive or to defer to his alpha status, and takes over the game. Molly moves to New York – to defy X, to get his attention, to defeat him, in the same she wants to defeat her father. But in New York the macho mobsters are even more nettled by her lucrative achievements.

It’s impossible not to watch this without submitting to the propulsive funkiness of Sorkin’s writing. You can hear the trademark rhythms. Sean Parker in The Social Network says: “A million dollars isn’t cool. You know what’s cool? A billion dollars.” Molly Bloom has something just as good: “You know what makes you feel OK about losing? Winning.” There’s the same addictive and amoral snap.

And who are the men in Molly’s life? That’s a mystery. Her lawyer, played by Idris Elba, is a gallant, smart guy who seems to be a demanding dad to his adorable pre-teen daughter, so maybe he’s more of a quasi-father figure to Molly, although her actual dad has a huge redemptive scene with Molly at the very end, a moment that only Sorkin could have got away with. Her romantic life is a mystery preserved to the last: potent, like the virginity of Queen Elizabeth I. Molly’s Game is another big winner for Sorkin.
Upplagd av Kultur Vinden kl. 12:37