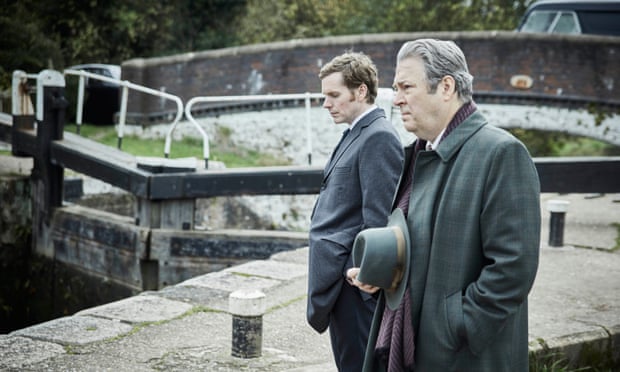 
As if to hammer home that ITV can do this kind of thing – suspenseful drama – every bit as well (often far better) than the BBC, a shortened series of Endeavour drew to a shudder and a shock of an end. It says much about Russell Lewis’s writing that the plots, the settings, even the direction can take such secondary place to the heart of the matter: that crucial relationship between Morse and Fred Thursday; and, to a lesser extent, the circling orbits of Sgt Strange, Ch Supt Bright, Dr DeBryn and Win Thursday.

The settings last week were rather splendid, involving opera houses and Venice’s Cimitero di San Michele; the plot involved some baffling insurance scam, which I, with my in-denial ignorance about all things money, couldn’t even begin to try to explain to you; and, as ever, Morse got his heart broke by a beauty.

But all of this was as nothing compared to the heartbreak of the towpath denouement between Shaun Evans and Roger Allam, Morse and Fred. Their bitter, equally stubborn, snapped recriminations eventually only twanged back to sanity by an appalled Max DeBryn, who defused all with a quietly threatening courtesy – oh, that a few such men might still live, defusing all with steely politesse rather than shouty hammy fists or playground insults – now that’s what they should write operas about.

Is the fallout terminal? Despite something of a rapprochement towards the end (and was there a hint, in Morse’s letter to Joan Thursday, of a return for Sara Vickers?), the haruspices speak ill. Who’d have thought, at the inception of Colin Dexter’s creation, that a simple cop show could pack in such high emotion? I defy you not to encounter a certain… scratchy tightness behind the eyes, as Ch Supt Bright (Anton Lesser) blinkingly refuses to countenance the death of his wife. Or at that too-brief shot of Fred Thursday, now stoic and indefatigible rather than thrawn and belittled, trusty hat beside him and six bullets in his snub-nose, racing to the rescue on the wintry boat train to Venice.
Upplagd av Kultur Vinden kl. 15:16