FILM: Which summer was the best for blockbusters? 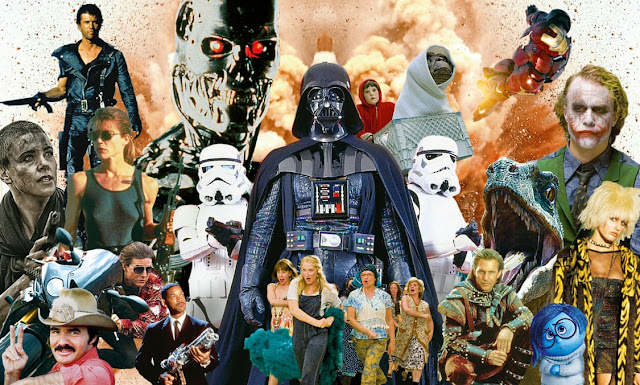 Mamma Mia! Those were the days of blockbusters!

Planet-killing asteroids! Alien invasions! Sneaky dinosaurs! These were the existential threats that 45 years of summer blockbusters had pre-programmed us to expect. Instead, something rather more insidious wiped 2020’s May-to-August movie slate clean, depriving audiences of their usual buffet of unmissable communal spectacles and/or over-marketed idiotainment. Starved of popcorn entertainment, it seems natural to look back hungrily. So what were the most explosive movie summers of the past?

After Jaws broke big in June 1975, fins would never be the same again. But if Spielberg invented the concept of the summer blockbuster, it was his pal George Lucas who perfected it two years later. Star Wars blasted off in May 1977, a galactic fairytale that became a gamechanger. Beyond Vader’s instant dominion, it was a summer of Jaws knock-offs (The Deep, Orca: The Killer Whale) and crowdpleasers such as Smokey and the Bandit and The Spy Who Loved Me, movies powered by appealingly laidback performances rather than special effects.
The moneymaker Star Wars raked in $200m in the United States that year alone.
The heartbreaker William Friedkin’s dynamite thriller Sorcerer completely stalled.
Bangs for your buck 4/5

If you had a time machine (DeLorean-based or otherwise), 1982 looks like an almost comically nostalgic US movie summer to experience in real time, and not just because you’d get to see ET: The Extra-Terrestrial six months before he waddled into UK cinemas. Viewed four decades later, it resembles a Stranger Things-themed retro starter pack: a parade of future classics including Poltergeist, Star Trek II: The Wrath of Khan, Tron, Mad Max 2: The Road Warrior and Blade Runner.
The moneymaker For a little guy, ET had legs ($360m in the US).
The heartbreaker The Thing bombed; audiences clearly preferred their aliens a little cuter.
Bangs for your buck 4/5

Guns N’ Roses or Bryan Adams? James Cameron’s mega-sequel Terminator 2: Judgment Day paired mercurial visual effects with heart-pumping emotional stakes, setting a badass high bar for bombastic entertainment. But audiences were also receptive to the throwback thrills of Robin Hood: Prince of Thieves and its inescapable theme ballad. The additional appeal of summer 1991 perhaps lies in its escapist comedy, with rooting-tooting romp City Slickers flanked by the deadpan silliness of Naked Gun 2½: The Smell of Fear and the Top Gun spoof Hot Shots!.
The moneymaker T2 ($205m in the US) was the highest-grossing film of 1991, no problemo.
The heartbreaker The masterful Barton Fink snuck out in August and squeaked only $6m.
Bangs for your buck 3/5

Will Smith had already tussled with aliens in 1996’s bombastic Independence Day but Men in Black took his soon-to-be traditional 4 July blockbuster slot and pushed it in a funnier, funkier direction. (There were additional alien encounters in Jodie Foster’s philosophically minded Contact and the flesh-shredding of Event Horizon.) Harrison Ford played an idealised president in stately thriller Air Force One but it looked a little plodding after the Nicolas Cage one-two of Con Air and Face/Off, a double apex of stylish shoot-’em-up mayhem.
The moneymaker Men In Black ($250m US) edged out Jurassic Park sequel The Lost World ($230m).
The heartbreaker Box-office bomb Speed 2: Cruise Control scuttled fond memories of the original.
Bangs for your buck 3/5

This was the modern superhero year zero, thanks to the success of the Robert Downey Jr-powered Iron Man and Christopher Nolan’s broody Bat-sequel The Dark Knight. These competing mythic visions would define blockbusters for the next decade but there was also some top counterprogramming in the form of WALL-E and Mamma Mia!, even if it was a summer tainted by the major bummer of Indiana Jones and the Kingdom of the Crystal Skull.
The moneymaker Holy box-office haul, Batman! The Dark Knight topped $530m in the US alone.
The heartbreaker The visually frantic Speed Racer flamed out but now looks ahead of its time.
Bangs for your buck 4/5

Bean-counters would instantly sign off on 2015 being the best blockbuster summer ever when Jurassic World stomped multiple box-office records. Yet that rather soulless commercial zenith was matched by some astounding artistic achievements, from the operatic Mad Max: Fury Road to Pixar’s literalised emotional rollercoaster Inside Out. Strap Tom Cruise to the outside of a cargo jet – as in the franchise-reinvigorating Mission Impossible: Rogue Nation – and sprinkle in big-hearted but self-aware comedies such as Ant-Manand Spy, and 2015 looks like a golden age.
The moneymaker Jurassic World gobbled up $652m in the US, second only to winter behemoth Star Wars: The Force Awakens ($940m).
The heartbreaker Joyous stripper sequel Magic Mike XXL somehow under-performed.
Bangs for your buck 5/5