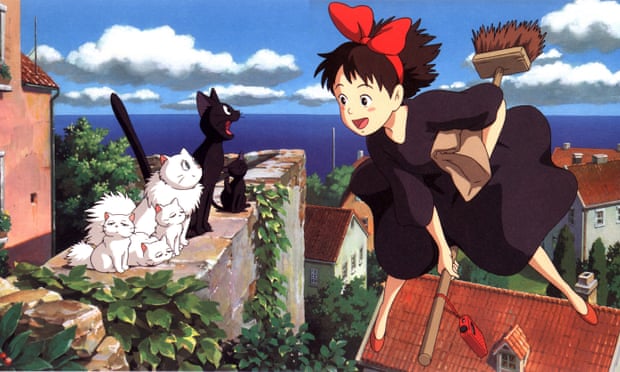 1) Number one - It had to be Totoro – Ghibli mascot, world icon, rabbit that loves to roar. The film follows two young girls and their father, who move into an old house closer to the hospital where the girls' mother recovers from a long-term illness. The daughters befriend the spirits of the nearby forest, including Totoros of various sizes and a giant cat shaped like a bus. Bask in the film’s summer afternoons, relax among its green rolling hills. Watch it on your own, watch it with your daughters, watch it with your granddad – just watch it. One of the great kid’s films, and one of the great films about being a kid. Available on Netflix now.

2) This was the film that made Studio Ghibli’s name outside Japan. Spirited Away is a bewildering, enchanting story of a young girl who passes through to another world full of gods, monsters and magic. The hand-drawn animation is remarkable, turning fantastical worlds into a series of intricate, playful artworks. As with so many Ghibli films, this is a story about the wonders of the natural world and the fantastical monsters that inhabit it. But it’s also a story about courage and belonging – and one that has had profound impact on audiences both young and old.

3) When Marnie Was There is a subtle, rewarding story about adolescence and identity based on a 1967 novel of the same name by British author Joan G. Robinson. Anna, voiced by Hailee Steinfeld in the English version, is a surly, withdrawn 12-year-old foster child who struggles to connect with her foster mother, or anyone else. When she's sent to a rural, seaside town to treat her asthma with some fresh air, she begins a friendship with a young girl, Marnie, who lives in a secluded mansion across the marsh. It occasionally drifts into melodrama, but it's an ultimately moving and beautiful story with all of Ghibli's trademark artistry.


4) Arrietty is a masterclass in the skill and subtlety of Studio Ghibli's animators, who create an enchanting world based on the classic novel The Borrowers by Mary Norton. As is so often the case with Ghibli, at its centre is the friendship of two children, but here it's between the 14-year-old borrower Arrietty and a human boy who discovers the "little people" while staying at his great Aunt's home to aid his recovery from an illness. There's nothing grand or complicated about the story, but it's a skilful and heartwarming version of a frequently adapted story. Oddly, there's a UK and US dub of the film with different casts, but the UK one featuring Saoirse Ronan, Tom Holland and Olivia Colman is the one to go for, especially as the US version needlessly tweaks the ending with some additional lines not found in the original production. On Netflix from March 1.

5) There’s barely any plot, but that’s the whole point. Kiki’s Delivery Service is a giddy, energetic story about a young witch, Kiki, her sarcastic cat Jiji, and the adventures they share in a typically rich and inventive animated world. This is a coming of age film, almost completely devoid of male characters, whose underlying themes belie its cutesy appearance. Kiki, one of Studio Ghibli’s most lovable characters, is an inspiring role model, not just for younger viewers but for parents, too. This is a film about confidence, adventure and striding out alone into a world you’re no longer afraid of. The abrupt conclusion leaves you yearning for a longer stay – but this film pulls off that rarest of tricks: it knows exactly when to end. Available on Netflix now. 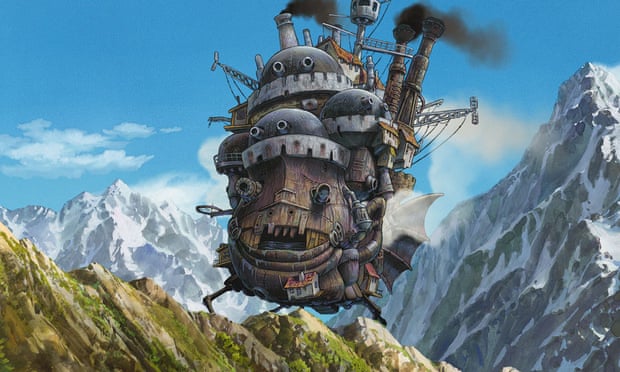 6) Adapted by Miyazaki from a novel of the same name,Howl's Moving Castle is his most overtly anti-war film. Set against the backdrop of a futile war fought using 20th century technology and magic, a young milliner is cursed by a witch and turned into an old woman. She heads to the countryside in search of a cure, where she encounters the eponymous castle and its owner, a troublesome wizard called Howl. Its mixture of charming characters and sumptuous animation is classic Ghibli, but it's among Miyazaki's darkest films, particularly in the imagery of huge swathes of planes dropping bombs on innocent civilians. On Netflix from April 1.

7) Opening on an evening in 1945, shortly after Japan’s surrender at the end of World War II, Grave of the Firefliesis one of Studio Ghibli’s most sombre films. Here, the animation coats the harrowing realism in a sorrowful, pastoral lament. This is a film about a world lost, of innocence lost, of pain and suffering and love. It’s also a story about two children forced to eke out an existence in a harsh, unforgiving wasteland. For licensing reasons,Grave of the Fireflies isn’t coming to Netflix, but everyone should seek it out and put aside two hours for one of the most effective and affecting pieces of animation ever created.


8) Miyazaki has a talent for making epic stories feel small and personal, and nowhere is this more apparent than inPrincess Mononoke. Set in a version of 13th century Japan, it depicts the struggle between the animal gods who protect the forest and the humans who want to cut it down to mine iron. Caught between them is Ashitaka, a prince from a minor tribe who is cursed to die, whose attempts to reconcile the adversaries is thwarted at every turn by deceitful humans and vengeful gods. It's action-packed and unusually graphic for a Miyazaki film, butMononoke really excels in the shades of grey – especially Lady Eboshi, a genuine humanitarian and feminist whose hubris precipicitates chaos and destruction. The balance between humans, technology and nature is one of Miyazaki's favourite themes and Princess Monokoke is the most evocative portrayal of his convictions.
On Netflix from March 1. AV

9) Only Yesterday is directed by Ghibli's other genius director, Isao Takahata, best known for the tear jerkingGrave of the Fireflies. It's a similarly realist drama, though thankfully more upbeat, about Taeko – an unmarried 27-year-old woman who travels to the countryside to get away from city life. The film flips between this period and her childhood as she grapples with the mundanity of her life in the city and the unfulfilled dreams of her childhood. It's a quiet, contemplative drama that examines the role of women in Japanese society. It won't be for everyone, but stands out as a unique piece of animated filmmaking.Available on Netflix now.

10) What to say about Takahata’s final film, The Tale of the Princess Kaguya, without swooning. For the most expensive Japanese film ever made, he took the country’s oldest folk story, the tale of the bamboo cutter, and made a bittersweet experiment about a ‘princess’ from the moon, who grows strangely fast, that runs to over two hours. Watercolours and animated sketch lines transform scenes of crafts, suitors, mountain snow and, yup, flight into overwhelmingly beautiful sequences. You’ve never seen anyone run quite like Kaguya. Watch with people you don’t mind seeing you weep uncontrollably. On Netflix from March 1.

And ... the one who never makes the best-of-lists:

An odd one – directed by Miyazkai’s son Gorō, who Miyazaki didn’t think could direct, based on a book by Ursula le Guin, who wanted his father to direct instead. The result is a real stinker – a plodding mess of mages and dragons. On the film’s release, Le Guin would say to Gorō: “It is not my book. It is your movie. It is a good movie", though later was far harsher, criticising the film’s violence. Available on Netflix now.
Upplagd av Kultur Vinden kl. 15:00