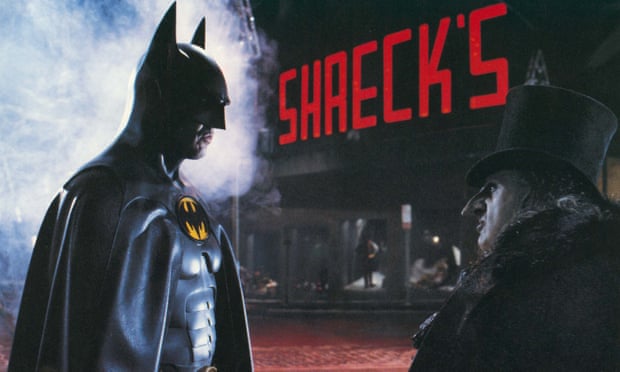 Batman Returns - but not Penguin.


Jack Nicholson’s 1989 turn as The Joker in Batman (★★★★☆) provided an almighty bang to start what was to become a tetralogy of movies, all four being re-released to mark the Dark Knight’s 80th anniversary in DC Comics. This Joker is a purple-clad supervillain who upstages Michael Keaton’s diffident Batman with no difficulty and whose capering craziness is periodically supercharged by the sound of Prince on the soundtrack. Directed by Tim Burton, the movie has a brooding noir feel. It even showed prostitution on the streets of Gotham City. The Joker is given an origin myth; Jack Napier (the JN initials leaning heavily on Nicholson’s own legendary bad-boy status) is a mobster and former street hoodlum with a fateful connection to the young Bruce Wayne. When he accidentally falls into a chemical vat during a shootout in a pharmaceutical factory, the fumes cause his face to contract into that hideous grin. A bad-guy barmstormer from Jack.

'The 1992 follow-up Batman Returns (★★☆☆☆) again directed by Burton and starring Keaton, is a strange beast. Michelle Pfeiffer gives us a fierce Catwoman who gets wittily transformed from a dowdy, spinsterish “cat lady”. But the look of Danny DeVito’s Penguin sails uncomfortably (but unintentionally) close to the antisemitic tropes that made Batman Returns hugely controversial at the time and perhaps explains the character’s absence from the Batman films ever since. He has a shabby coat, a top hat, a hook nose. The hook nose is supposed to resemble a Penguin’s beak, the shabby evening wear a visual pun on penguin-suit/tuxedo. But when the Penguin arrives in the story as an abandoned baby, did he have to arrive in a Moses basket? 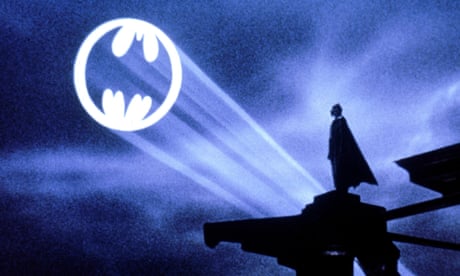 Batman Forever (★★★★☆) saw Joel Schumacher take over the directorial reins in 1995, and it was a buff Val Kilmer ­as Batman in this enjoyably camp iteration. His caped crusader is planning to renounce his vocation to pursue his love affair with Nicole Kidman’s slinky psychotherapist Chase Meridian. Tommy Lee Jones is Two-Face and a typically hyperactive Jim Carrey gets laughs as the Riddler. The somewhat forgotten Chris O’Donnell is brought in as Robin, and he’s actually not bad. The whole thing is just that little bit wackier, perhaps closer to the 60s TV version – although Two-Face’s burns are nastier than that show would have permitted.

Arnold Schwarzenegger got top billing over George Clooney in 1997’s Batman & Robin (★★★☆☆), playing Mr Freeze to George’s Batman, and Michael Gough makes a poignant final appearance as Alfred. Uma Thurman is the unhinged environmentalist Poison Ivy (“Gotham will be mine for the greening”) and Alicia Silverstone is Batgirl (she reclaims the sexist word). An amiable, almost farcical Batman episode, with George in Nespresso mode.
Upplagd av Kultur Vinden kl. 00:30