Al Pacino
It wasn’t Pacino’s night, in lots of ways. First the 79-year-old took a tumble heading up the stairs to the Albert Hall (in New Balance trainers, to rub salt into the wound), then he lost out for best supporting actor to Brad Pitt, whowasn’t even there.

Thelma Schoonmaker
Another Irishman graduate having a disappointing evening – particularly given that she was given a fellowship last year – was Scorsese’s long-term snipper. Picking the editing in Ford v Ferrari over Schoomaker’s virtuoso chopping on The Irishman seems especially wacky.

Greta Gerwig
Given the hoo-ha over her omission from the best director list, you’d be forgiven for thinking that Gerwig was something of a shoo-in for best adapted screenplay for Little Women. Maybe they’d give it to Steven Zaillian instead? That could be The Irishman’s consolation gong? Nope! Jojo Rabbit bounced off with the Bafta, following last night’s win at the Writers Guild of America awards, making it a virtual Oscars lock.

Cats
When your star says she’s just attended the film’s funeral and the host chooses it as his one film to dump on, you can safely consider yourself this year’s dope in the stocks. 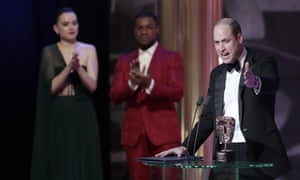 Prince William on stage, with Daisy Ridley and John Boyega
looking on
from the wings.
Photograph: Guy Levy/Bafta/Rex/Shutterstock

Baftas
The British Academy of Film and Television Arts – or at least its membership – failed to cover themselves with glory with this set of awards. #BaftasSoWhitehas been trending, Cynthia Erivo’s refusal to attend was widely reported, People Just Do Nothing’s Asim Chaudhry had a pop at Laurence Fox on stage, and Rebel Wilson drew scabrous attention to the gonads of the best director nominees. But the most ominous sign of the times must be that Bafta’s own president, Prince William, felt moved to give it a royal telling off in his normally anodyne closing remarks. “That simply cannot be right in this day and age,” said the heir to the throne. Bafta will have to get this sorted out sharpish.

Animation’s old guard
Netflix has already proved itself a master of the awards circuit (read: throw money at it until everyone else gives up), but even it must have been a bit surprised at its first success of the night at the Baftas. Middlingly reviewed Christmas cartoon Klaus saw off big boys Frozen II, Toy Story 4 and A Shaun the Sheep Movie: Farmageddon – or, as the industry would term it: Disney, Disney and Aardman. That’s a major Hollywood studio and a national-treasure British powerhouse. Netflix isn’t messing about.

Every other nominee for the casting award
Bafta has been roundly applauded – not the least by the casting director fraternity – for its inaugural award for best casting. So who did it go to? The dazzling colour-blind tapestry of Dickensian humanity that was The Personal History of David Copperfield? The immaculate late-60s pop-culture document Once Upon a Time in Hollywood? Or maybe Marriage Story, with its frankly brilliant raft of cameos underscoring two powerhouse leads? Er, no. The winner was Joker. Now, Joker is undoubtedly a superb evocation of a grimy early 80s New York (yes, we know about the King of Comedy references), and revolves around a major-league performance by Joaquin Phoenix. But no one else in the film gets much of a look-in, however good they are. Zazie Beetz, Frances Conroy, even Robert De Niro don’t exactly have opportunities to stretch themselves. We’re not saying just anyone could have done those roles, but apart from Phoenix it’s not exactly an acting showstopper.
Upplagd av Kultur Vinden kl. 15:00